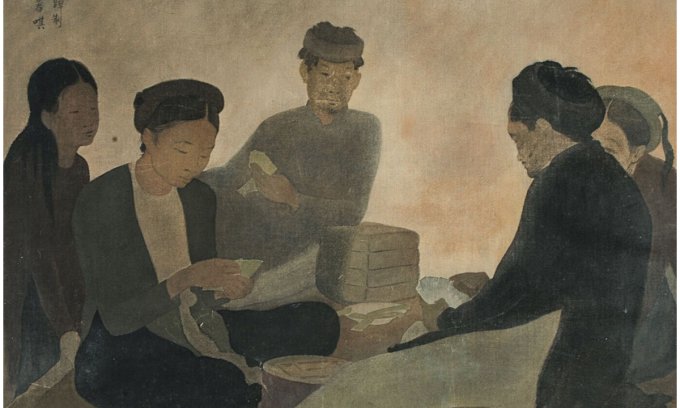 The works of the painter Thang Tran Phenh sold for 1.5 million euros at French auctions

They were offered at the “Indochina – Chapter 14” auction in Paris live on the company’s website.

French auction house Lynda Trouve had predicted a price range of 30,000 to 50,000 euros for each painting.

Collector Pham Hoang Viet, who listened, said there were many back and forths between two collectors, before “The Card Game” went for 600,000 euros (excluding surcharges).

“Both paintings are quite large and look great on silk. Phenh frequently depicts traditional Vietnamese activities like playing the Tam Cuc card game and divination in his work. His large paintings on silk are even rarer.

“In 2000, the Hong Kong auction house Sotheby’s auctioned off one of his silk paintings. Prices for his paintings have since risen.”

Art scholar Ngo Kim Khoi said it was the highest price ever achieved by Phenh paintings.

“The piece has fetched a high price since it was displayed at the prestigious Paris Colonial Exhibition, and Phenh silk paintings are extremely rare.”

“The Card Game”, created in 1931-32, depicts two men and three women dressed in traditional clothing engaged in a game of cards.

The artist’s signature, seal and two lines of old handwriting are visible in its upper left corner.

“The Wizard” appeared around the same time. It shows three figures seated around a platform with a plate and three incense sticks. A male fortune teller in the middle holds a porcelain plate while two women watch him work.

The auction house claims that the two silk paintings belonged to Léopold de Stabenrath, press correspondent in Hanoi from 1975 to 1997.

Due to humidity and the passage of time, mold has developed in the works of art.

The auction house first attributed it to another deceased painter, Tran Binh Loc, because of the ideograms “Tran Binh” in Sino-Vietnamese in the lower left corner.

They later credited Phenh after learning that was his pen name.

Prior to the auction, Khoi revealed that he helped Sébastien, a representative of Lynda Trouve, determine that the real perpetrator was Thang Tran Phenh. The auction company also updated a photo caption to reflect the correction.

Thang Tran Phenh (1895-1972) is one of the best-known artists in the Vietnamese fine arts village of the late 19th and early 20th centuries along with painters Le Huy Mien and Nam Son.

From an early age, he had an aptitude for art. He received the Tien Duc Enlightenment Association Fine Arts Prize in 1923.

In 1926, at the same age as other famous artists like To Ngoc Van and Vu Cao Dam, he was accepted into his second promotion by the College of Fine Arts of Indochina.

Two oil paintings and a silk painting by Phenh are currently on display at the Vietnam Fine Arts Museum in Hanoi.

Several of his works, including “Le jeu de cartes” and “Le sorcier”, were taken to France and Italy in the 1930s to be exhibited at the colonial exhibitions in Paris and Rome.

In 1931, after completing his studies, the artist decided to concentrate his efforts on creating works specifically intended for the stage.

He then took a troupe on a national tour to Hanoi, Hai Phong and Nam Dinh before closing it in 1943.

The artist joined the resistance movement against the French at the end of 1946, moving his family to Bac Giang province so that he could work for the 10th Interdepartment of Information and Propaganda.

He and his family then returned to Hanoi in 1954.