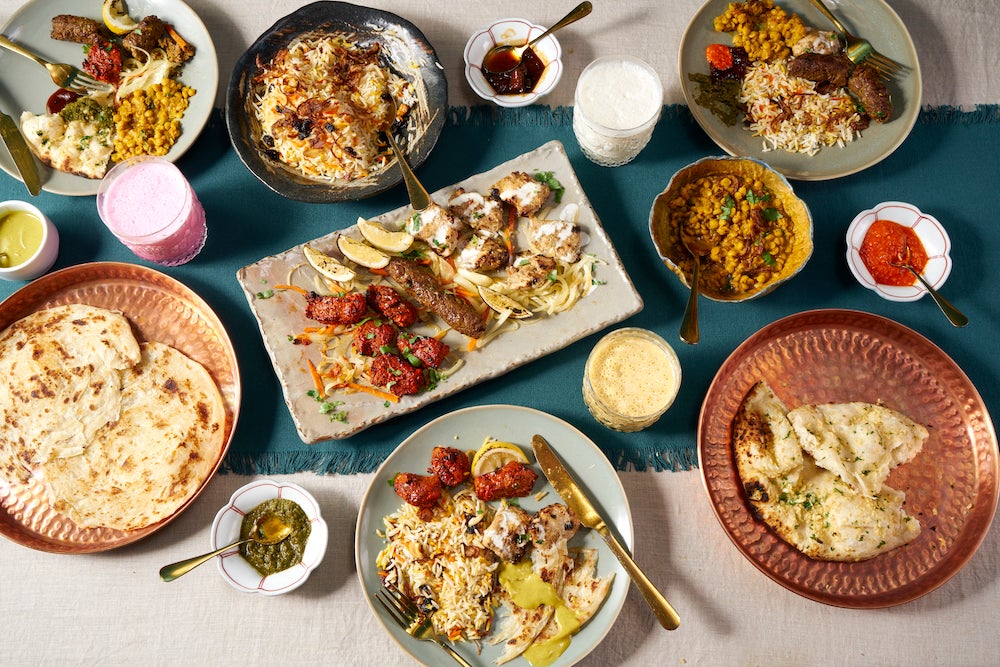 There are two main journeys you make to the cinema: one from the box office to your seat and another from your seat into the cinematic world of the film you are watching. Restaurants are able to create similar experiences, not only through decor, but also through the dishes that come out of the kitchen.

The two conditions, that of being a spectator and of dining in a restaurant, abound in the possibility of change. Your perspective changes. You experience a new union of flavors. Suddenly you’re wearing someone else’s shoes.

I stood in my Doc Martens on the third level of One Bonifacio High Street, giddy to find myself in someone else’s shoes, trying something different, maybe learning something new .

The mall housing Kashmir’s new outlet is like any block in one of the shoeboxes dotting Metro Manila, but the restaurant glows softly – a warm, pampering palette of turquoise and copper paint shimmering under dim lights.

Three sisters who turned the mystical into magic

In 48 years of activity, Kashmir has become an institution of Indian cuisine in the country. Launched by sisters Indra, Kamla and Sita initially as a way to pass the time, Kashmir traced its branches into families’ lives as something different and as the country’s very first Indian restaurant.

Sita is credited with the recipes served in Kashmir – dishes inspired by the culinary traditions of North India whose creamy and spicy curries, fresh meats, vegetables, yoghurt, ghee, paneer and dried nuts are characteristic.

Leon Araneta, the 6’3 silky smooth new owner wearing a Kashmiri shirt and kimono, pays tribute to the restaurant’s founders by accepting the cookbook given to him.

“Having inherited such a wealth of recipes tested for decades by Sita [was] the most beautiful gift,” he says. “These recipes are the heart of the restaurant. His food continues to charm our guests to this day.

Although the ownership of the restaurant has changed, the recipes remain charged with the same spirit, supporting the idea that Kashmir “introduces Indian hospitality to Filipinos by turning mystique into magic”.

“In 2016, I heard from the son of one of the owners that Kashmir was going to be put up for sale,” Araneta recalls. “My first thought was, ‘Here is an institutional restaurant, Kashmir, the first traditional Indian restaurant in the Philippines where many people discovered Indian cuisine for the first time.’ I just couldn’t bear the thought of another culinary institution being sold for parts, thrown away and forgotten.

Araneta’s connection to mature cultures finds an early memory in his 26 years in Mexico where he trained on Saturday mornings, rode mountain bikes and reveled in Mexico City’s nightlife. His first taste of Indian cuisine, however, was back home in the Philippines with his Indian classmates at the Asian Institute of Management.

“What made Indian cuisine so welcoming to me was the warmth [my Indian classmates] were, inviting me to sit and eat with them,” Araneta explains. “‘Eat this. Try this.'”

Araneta was not the first in his family to open his eyes to Indian cuisine. He remembers his mother-in-law, for three years in a row, celebrating her birthday in Kashmir, then located along Pasay Road.

“Parking was a challenge,” says Araneta. “The interiors were interesting but had clearly seen better days and the service, while lovely, was inconsistent. But as soon as I sat down at our table covered in plates of food, I couldn’t stop eating.

Tangy, spicy and noisily orange chicken tikka masala, tender and salty mutton kebab, palak paneer, aromatic rogan josh, we can imagine the essentials of your mother-in-law’s birthday parties spent at the restaurant. These generations old recipes remain on the menu even as the new management adds its own additions to the menu structure.

The classics are accessorized with burger additions, namely the mutton seekh burger and the paneer burger, as well as even more vegetarian and vegan offerings.

“After my own travels in India, I realized that we hadn’t even scratched the surface of the wealth of herbal dishes“says Araneta. “As a North Indian restaurant, Kashmir is best placed to highlight how delicious vegetarian and vegan cuisine is.”

Paint splashes on a table

The food tables in Kashmir vaguely resemble Yayoi Kusama exhibits – lots of color, a few splashes here and there, a bit of spilled curry staining the tablecloth. Food arrives in a suite of ceramics and bowls, table water in copper cups. The outdoor terrace is dimly lit as the sun paints the sky over Bonifacio High Street a candy pink.

A look away from the setting sun reveals a warm interior color palette. Araneta says about 16 colors were selected by Manila-based Spanish muralist Cesar Caballero to give depth to the restaurant and create a beautiful world for customers to find this other new pair of shoes. “I wanted to create a space that reflects the beautiful, forward-thinking side of Indian culture,” says Araneta.

Despite all the new, I found myself marveling at the old – the attempt at preservation that literally kept me on my feet. Forty-year-old chairs from the founders’ homes have been renovated and are still in use at the new site.

My table orders a paint of papadam masala, chicken tikka, rogan josh, organic tandoori mushrooms, chicken biryani and okra fries. Anticipating the swelling of my stomach and hoping to escape the myriad worries of modern life, I quickly order one of the restaurant’s signature cocktails, the New Delhi negroni. This time it’s served with the usual bitterness, but a hint of Kashmiri spice, like a sweet cinnamon note, hovers above the glass and lands on my nose.

The meal hovers to the tune of catchy music, the dancing to-and-fro of a conversation, and a world that retires until tomorrow. Splattering chicken tikka stains the table with orange stains as the salty, spicy, smoky smoke of tandoori mushroom lingers behind my teeth. The negroni acts as a bitter refreshment between snacking on the leftover plates of food.

Gulab jamun, soft bites of saffron and cardamom and spicy date cakes complete the evening. The restaurant vibrates, as restaurants did before a pandemic locked us in our homes. It was the buzz of people going out and having fun and trying something new.

We were in our own worlds, shaped on plates by chefs and recipes crafted by generations, all refreshed in a new outlet with new options available.

When asked about the future of Kashmir, Araneta replies, “I would like to see Indian cuisine become a viable option when people dine out. Filipinos, Americans, Chinese, Italians, Spaniards, and Japanese have always been our top options when we Filipinos eat out. I want to add Indian food to this list.

I walked out of the restaurant and back into the shoebox, a little dazed – the bright lights, my stomach full (it was only a negroni), apparently interfering with the normal functioning of the brain. The movie was over and I was back in the normal world, but I had glimpsed the culture that three sisters had brought from India decades ago. Leon Araneta seems to have succeeded in his quest to make Kashmir “the gateway to Indian cuisine”.

I quickly look at my feet to be sure. “No, still my Docs.”

This story was first published via fnbrreport.ph

Get the latest lifestyle news delivered to your inbox