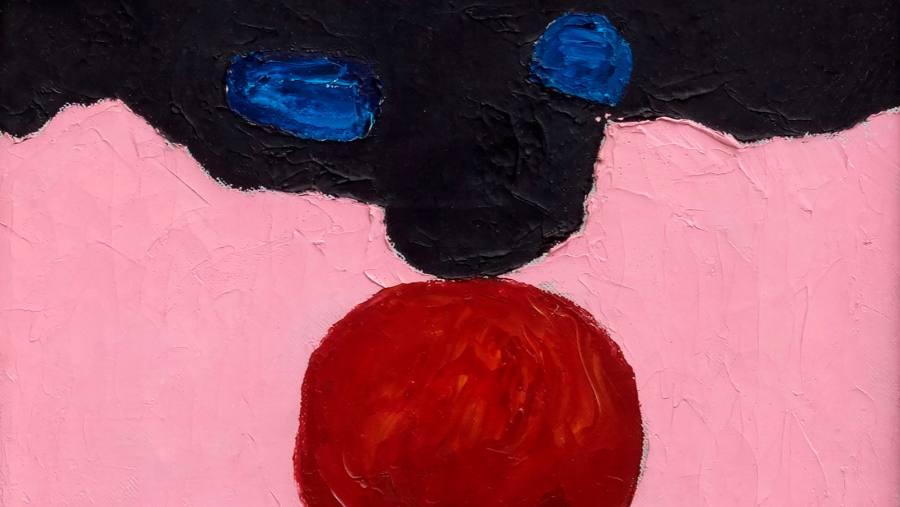 At first glance, Forrest Bess’ 1946 painting “Untitled (The Dicks)” looks nothing like its title suggests. One of his early visionary paintings – inspired by images that occurred to Bess between waking and sleeping – it is a repeating pattern of ovals in orange-yellow, a few spots of the black background of the canvas left untouched.

It is one of the first works encountered in From nowhere, a retrospective at the Camden Art Center in north London for the mid-20th century American painter and the first major institutional exhibition of his work in the UK. The play captures Bess in both her most compelling and enigmatic aspect; his work comes to life when it stands at an uncertain point between the abstract and the figurative, between the real world and the artist’s unconscious.

While painting was a staple throughout Bess’ life, he was never a full-time artist. Born in Bay City, Texas in 1911, he began painting as a teenager, taught by a neighbor. In 1931, he enrolled to study architecture at the University of Texas, but found himself drawn to texts on religion, psychology and anthropology, which would define his work as an artist. After dropping out of college in 1932 and working in the Beaumont oil fields, he set up a paint shop two years later in Bay City. After World War II, in which Bess enlisted in the Army Corps of Engineers, he returned to a family fishing camp at Chinquapin. It was there that he developed the symbolic and personal work that defined his later life.

Despite Bess’s deeply personal visual language, informed by life as a gay man in rural Texas, and despite his radical ideas about sex and gender, his work was shown in the 1950s and 1960s in the large Betty Gallery. Parsons, who represented other abstract artists, including Mark Rothko and Jackson Pollock. While it may be tempting to think of Bess’s work in the context of these contemporaries, the range of sources from which he drew – from Eastern spirituality to a (largely one-sided) correspondence with the Swiss psychoanalyst Carl Jung – makes it unique. .

Some paintings explicitly capture his mindscape. Another early work, “Untitled (The Crowded Mind/The Void)” from 1947 features a series of cluttered symbols (geometric shapes, the sun, an airplane) with a piece of canvas cut by a wave of black, as if there were ideas that the artist is incapable of rendering. Some of these symbols recur like signs on a map – arrows and triangles, leading your gaze far beyond the gallery – as Bess tries to make sense of uncharted territory both physical and metaphysical.

In many ways, Bess’s work feels transitional, not only in the way he moves between states of consciousness and unconsciousness, but also in the way he has tried to make sense of his own body through painting, writing and medical intervention. Through surgery, Bess became what was then called a “pseudohermaphrodite” – having, in her case, biologically male chromosomal tissue but the external genitalia of a biologically female person. (The term has become obsolete; “intersex” is now preferred.)

For Bess, it was vital to reaching a state of what he considered transcendence. His work testifies to this feeling: “Tree of Light/Sign of the Hermaphrodite” (1953) offers the first half of its title as a bifurcation, black branches on a gray background. But in the middle of the canvas, we move from the tangible reality of the tree to a more abstract space: a golden background, with Bess’s “hermaphrodite sign” – a small orange and red oval, like a ball of fire — aligned with the branches. It makes the known world seem to suddenly vanish as Bess tries to make sense of it through something more abstract.

The motifs that keep Bess’s work anchored in the real world – the doors, the spiers, the branches of his tree of light – are the best way to make sense of the symbolic and subjective realm to which the artist kept returning, fragments of a map that was never quite finished.

There’s something good about the final tableau of the exhibition “Here’s a Sign” (1970): its yellow arrows on a black background look like a traffic sign because they point to a dead end and eventually turn in circles. It’s an image that captures both Bess’ ongoing desire to articulate her visions and the seeming impossibility of bringing them into the real world, fully formed. Like the artist himself, his paintings linger somewhere in between, uncertain and just out of reach.