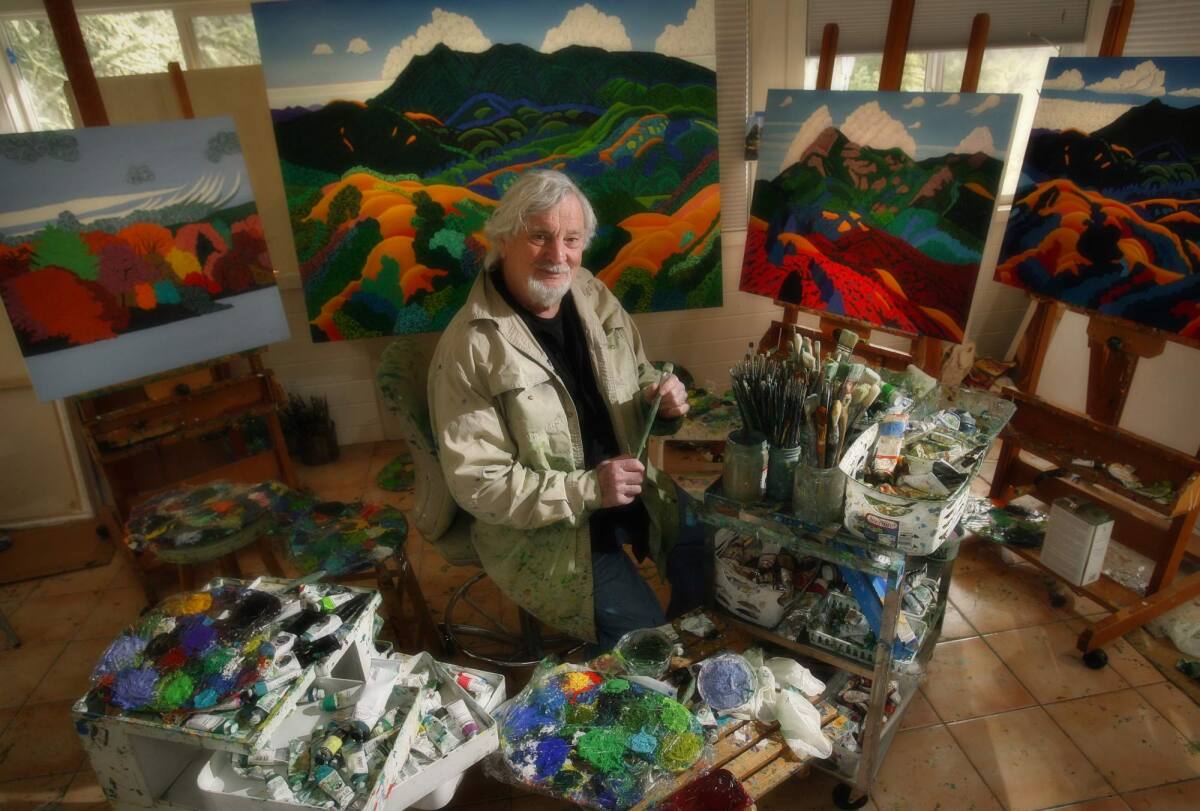 Long-time Sonoma County artist Jack Stuppin has an enviable reputation for his colorful and distinctive paintings of northern California landscapes, but his latest exhibition deals with a very different part of the country.

“Jack Stuppin: The Beginning of My World” opened earlier this month at the Hudson River Museum in Yonkers, New York, in the area where Stuppin, 87, learned as a child to enjoy viewing the scenery.

His horizon has widened considerably since his childhood. Stuppin brings a strange mix of experiences to his job: an education at Columbia University, service in the Marines in Japan during the peacetime between the Korean and Vietnam Wars, and a successful career as a banker in investment and entrepreneur in the Bay Area, especially in early computer technologies, from the 1960s.

â€œI have been one of the luckiest people in the world,â€ Stuppin said. “I didn’t have a major in college and no business experience, but I helped start six businesses and five were successful.”

He moved to western Sonoma County in 1988 to devote the rest of his life to painting, and within a few years he became a founding member of the famous Sonoma County Four, along with William Paul Morehouse, Tony King and Bill Wheeler.

The four artists began painting together in the early 1990s, doing outdoor works on location. In 1992, they traveled across the United States from California to New York, painting across the country.

Stuppin’s work is in the collections of 21 museums across the country, including the de Young Museum in San Francisco, the Oakland Museum, and the Crocker Art Museum in Sacramento. He has been represented by the ACA (American Contemporary Artists) galleries in New York since 2010.

Stuppin became known for his colorful and striking landscapes, dotted with what fans have called “Stuppin Hills”. He estimates that 95% of his 140 or so paintings to date are depictions of Sonoma County. But others mark a return to the part of his youth in the Hudson River Valley.

â€œJack started sending me letters maybe 20 or more years ago,â€ said Laura Vookles, chair of the Hudson River Museum’s curatorial department. â€œHe used to send me cards about his shows in California, telling me he grew up in Yonkers.

â€œIn 2009, Jack exhibited in his gallery in New York. It was all scenes from upstate New York and the Hudson River, â€Vookles said. â€œWe were drawn to his work to begin with. It’s hard not to be.

In 2010, the Hudson River Museum held an exhibition titled â€œPaintbox Leaves,â€ a tribute to the Hudson River School, the large group of American landscape painters of several generations who worked between circa 1825 and 1870 and were inspired by the region.

â€œI said, ‘We have to have a painting by Jack Stuppin’,â€ Vookles recalls.

This ultimately led to Stuppin’s current solo exhibition in Yonkers, showcasing nine of his paintings from the Hudson River region, including one of his works which is already in the permanent collection of the Hudson River Museum.

On his return visits to the Hudson River Valley, Stuppin used his usual technique, first sketching an open-air rendering of the place in person, then using photographs to complete the painting in his studio.

â€œThese paintings were done over a six-year period,â€ he said.

Even the most avid Stuppin fans can’t expect to drive across the country to see his show, but pictures are available at hrm.org/exhibitions/jack-stuppin.

The Hudson River Museum exhibit runs through January 2, 2022 and will include in-person appearances on Saturday and Sunday July 22 and 23 from Stuppin. Vookles said she was excited about it.

â€œI don’t think I’ve ever met him,â€ she said. â€œI just spoke to him on the phone several times and exchanged emails. I therefore look forward to his visits.

(This story has been updated to add that the Jack Stuppin exhibition has been extended until January 2.)