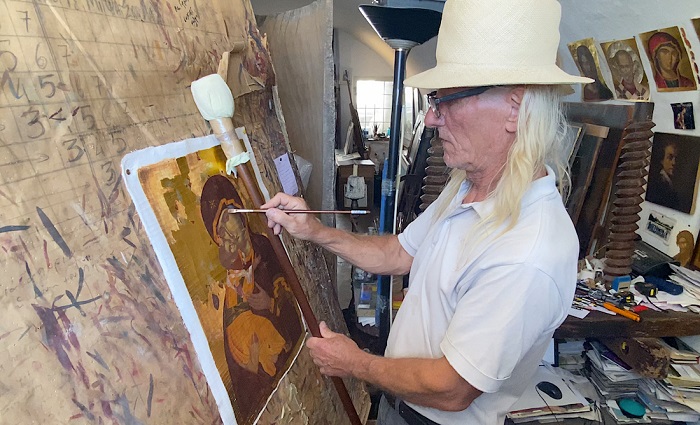 Dimitri Kolioussis, the icon painter from Santorini whose work has been exhibited around the world, is an eccentric, intelligent man with a quick wit and some would say, a little eccentric.

Kolioussis works year-round in his underground studio in the heart of Oia, a space that has an ambience perfectly suited to his art and personality. His work surrounds him along the walls of the cave, and the space is often filled with the sound of the classical or Byzantine music he loves.

Kolioussis was born in the stunningly beautiful but rarely visited region of Epirus in northwestern Greece. His interest in drawing and painting dates back to his childhood and he is completely self-taught.

As a child, his experiences in the small isolated churches of the mountains of Epirus left a lasting impression on him. He admits to feeling mesmerized by the combination of sights and sounds when he is inside some of the old churches and small chapels in the remote part of Greece where he grew up.

He learned to love Byzantine art, music and architecture. He describes it as a fusion of ancient Greek, Roman and Middle Eastern art forms that has immense depth, history and significance.

A painter settles in Santorini

At the age of 21, he decided that painting should be his calling in life, although he still had to help support his family. He managed to travel across Europe and eventually visited Santorini by boat in 1978.

The island then was very different from its modern, cosmopolitan self that it is today, and the facilities were very basic. He was let out of the ferry below the village of Oia, onto a smaller boat which at the time brought visitors ashore. From sea level he looked up and saw the cliffs of Oia for the first time…. and he knew. This was the place!

Thirty years later, the icon painter from Santorini still lives and works in Oia, producing some of the world’s finest artwork in his highly specialized field. He works with materials that, in his words, have “a story and a character”. These include old doors, old wooden window shutters and pieces of wood that he processes and prepares himself before using them as canvas.

When asked if he first has an image in mind, then searches for the right piece of wood, he pauses: “Not always…sometimes the old wood tells me what should be above.”

Looking at his studio, one gets the impression that there is a lot of discussion between the artist and the old wood. The images seem to match the character of his wooden canvases perfectly.

Although he painted in oils, he favors the classical technique of egg tempera. This is the technique of applying egg yolk (without the membrane) and powdered pigments. It’s a painstaking process, but paired with the exquisite gold and silver leaf gilding and meticulous preparation of the antique wooden surfaces, it produces stunning results.

Each of the Archangels he has painted recently is depicted on a separate old door. The detail (considering the support on which it is painted) is exquisite.

Works exhibited around the world

The Santorini icon painter’s work has been exhibited around the world and, COVID permitting, he will be doing it again soon. But much of his special work is still hidden, at least from public view. Over the years he was commissioned to paint some of the finest private chapels in Greece and other countries, as well as frescoes for villas.

He is also commissioned by churches, as well as by international collectors.

Having spent quite a few winters in Oia, the artist and I often sat over coffee or ouzo (or both) and philosophized about the state of nations, cities, geopolitics , the global economy and anyone else we think has a problem that requires our invaluable input.

His mind is quick, his knowledge extensive and his ideas very creative, as you would expect. I’ve often wondered what he does in the winter when there’s no one to talk to, and then I noticed this:

Parts of his cave wall are covered with quotations, ideas, thoughts and opinions written in pencil. It’s a kind of personal graffiti. I asked him about the writings, and he shrugged: “Just random thoughts,” he said.

However, it’s not just random drivel. These are very personal thoughts, poetry and opinions held at the time. Anything but random! It turns out that the wall was his companion for the day.

I have always believed that good or great artists are children at heart. Some declare it openly (Steven Spielberg), others disguise it.

I asked Kolioussis what he liked in the arts. He mentioned modern art, architecture, music and all the great painters. Then he sat down again and said, “But what gives me the most pleasure are children’s drawings.” Imagine that…

I didn’t want to interfere anymore, so I told the Santorini icon painter that I wanted to ask him some questions that I’ve been asking people for years. If I had to make a movie about you… who would you like to play YOU? DK: “Hm…. a peasant from the countryside,” he replied.

When asked “What is one thing you believe to be absolutely true, but can’t prove?” he replies “A fourth dimension.”

So, dear reader. Imagine this. It’s winter, and there’s no one in the village but me and this eccentric guy who paints icons. It turns out that he paints very, very well, that he is a published wall-writer, that he is modest (at least sometimes) and that he feels the fourth dimension.

I don’t know about you, but he doesn’t seem like a bad person to have coffee or ouzo or both with. In any order…

Michael Ermogenis is a management consultant and strategic advisor at the Santorini Chamber of Commerce. He lived in Oia for twelve years and is the founding member of the “Save Oia” campaign. It is also a founding member of the Mediterranean Alliance, which includes the localities of Venice, Oia, Corfu, Dubrovnik, Rhodes and Crete..