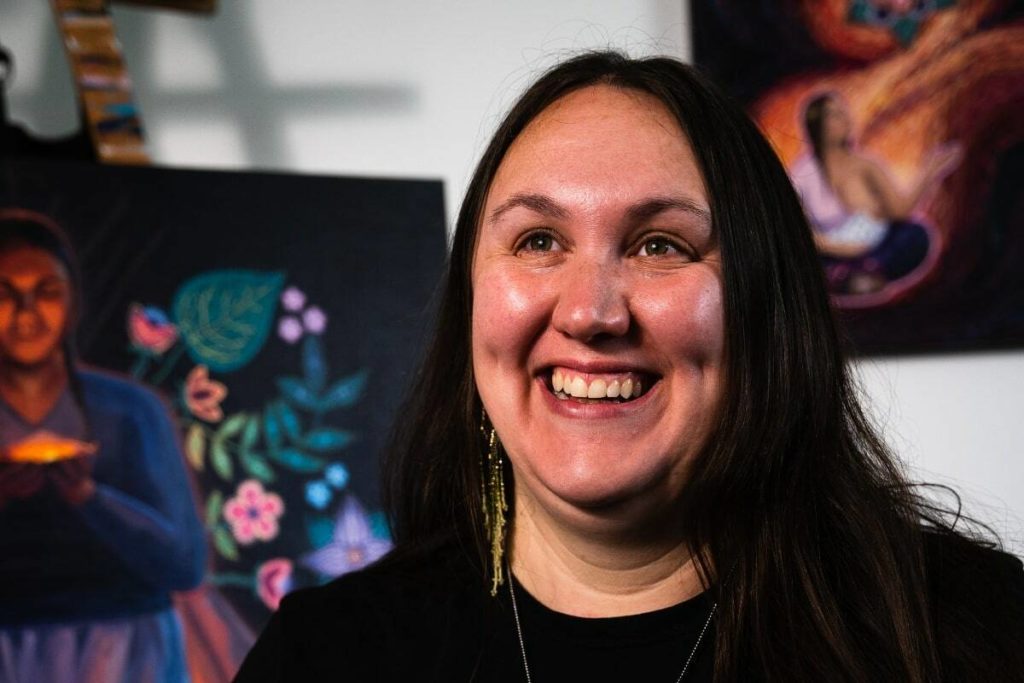 A Prince George painter has been awarded a grant for her work that showcases the “immaterial spirit” of the Métis through the ages.

Erin Stagg received the Nakaatchitow (the Michif word for “skill”) scholarship for arts and culture offered by British Columbia Métis Nation (MNBC) at the end of last year, and his work will be on display at the Métis Nation headquarters in Surrey from July to September.

Originally from Fort St. James and raised in the Métis culture, Stagg’s unconventional journey as a professional artist has taken her into fields such as journalism, biology, geography and environmental consulting.

“I had kept painting, all through this, all through school, all through everything,” she said, “I was thinking, well, let’s see if I can sell a few things And I enjoyed the challenge of doing it so much that I stuck with it.

Although Stagg grew up outside the Métis territory, she was greatly inspired by a trip to Saskatchewan with her mother and daughter.

“A lot of us who were born here don’t even know what Saskatchewan is necessarily like,” she said. “It was important for me to visualize what the grasslands look like.”

The paintings tell the story of Métis heritage and demonstrate the independence, resilience and spirit of Métis people. The grant supports 12 original paintings which will be forwarded to other galleries later this year.

Grants like these are essential for all artists, but Stagg felt especially grateful after the pandemic cut her income by 80%.

“It’s like a diamond,” she said, “It’s huge to be able to say, ‘I have this big dream, but it’s otherwise impossible for me to achieve it, will you help me ?'”

MNBC announced the competition on August 3, investing $175,000 to support Métis artists in British Columbia. Grants range from $5,000 to $30,000. Stagg declined to share his total, saying only that it was the highest.

The grant was created to ensure that “Métis artists have the opportunity to create unique art and new ways of expressing our culture,” said MNBC Minister for Culture, Heritage and Language, Patrick Harriott , in a press release.

Stagg strongly agrees with the goals of the grant, as she said arts funding is essential to preserving Métis culture.

“Culture does not go through mining trucks. It is transmitted through song, through art, through music,” she said. “This is how we are able to preserve, inspire and teach our feelings, our culture and our indigenous worldview.

Stagg thinks this kind of funding is long overdue.

“It’s important that people see Métis history as something that is part of Indigenous history,” she said. “The bar is set so low that any turnout is better than what we got.”

Stagg – whose work is in private collections around the world – lives with her husband and daughter. She is in the process of writing and illustrating a children’s book and is continually inspired by her heritage.

“These things are so incredibly intangible, so hard to imagine, so hard to capture. That’s what we artists do.

Other scholarship winners and their projects:

Nevada explains how the Nakaatchihtow Arts and Culture Project grant helped her shine a light on elders, activists and artists using portraiture to serve the community and the nation, ultimately becoming one of her greatest opportunities life.

John shares his story of how he got started making violins and bows, as well as how the Nakaatchihtow Arts and Culture Project grant is helping him achieve his long-term goals of passing on knowledge of his trade to young Métis.

Interview: painter Ko Lap connects Hong Kongers to literature to fight against the “feeling of helplessness”