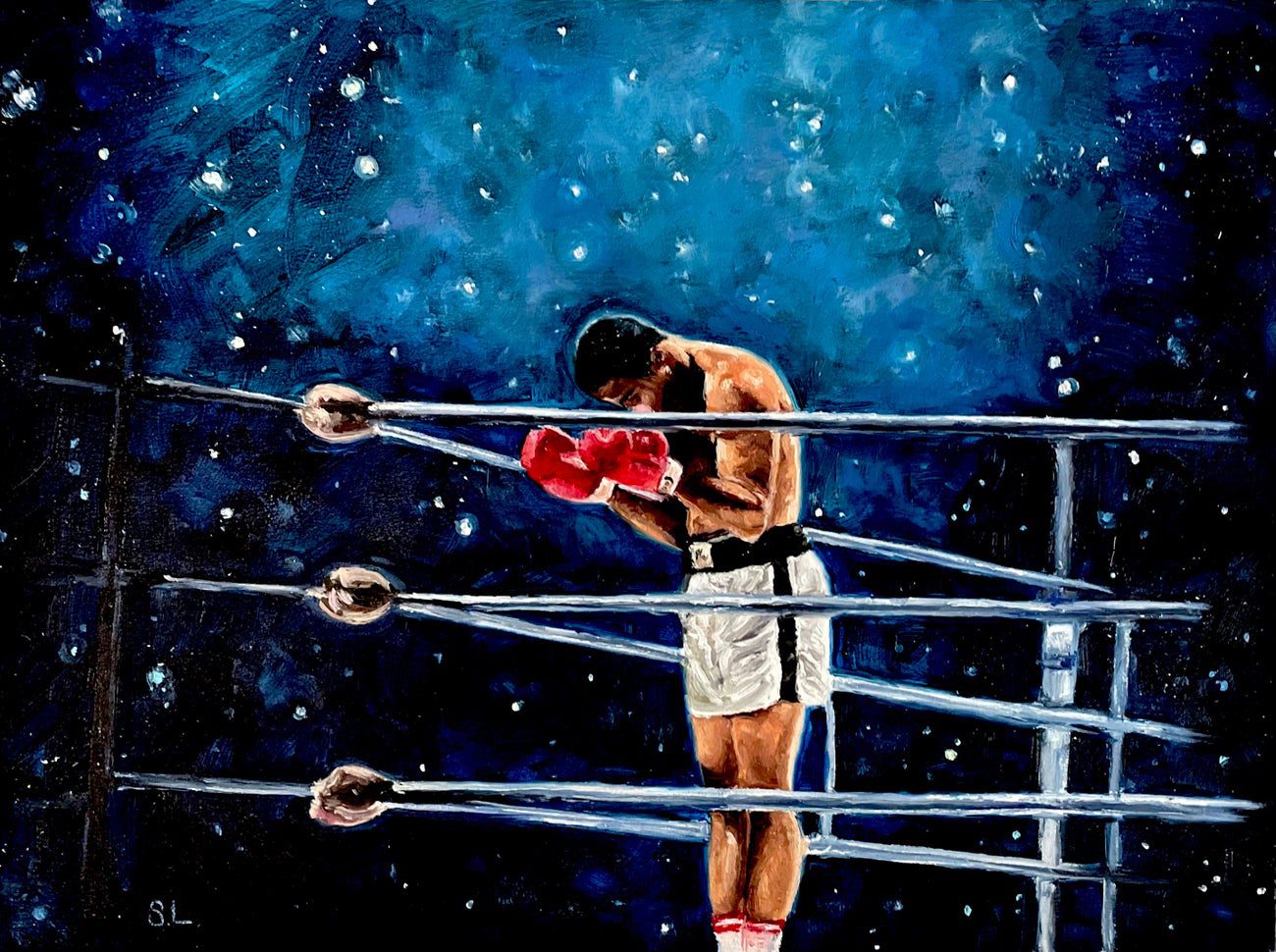 Pioneer painter of Islamic Impressionism with an eye for the universal

But on the eve of the Muslim holiday of Eid al-Adha, celebrated this year in early July, Latif made an exception, sharing the inspiration for his latest piece, titled “The Sacrifice”, with his more than 16,000 subscribers on Instagram and Twitter.

Eid al-Adha commemorates the story, told in the Quran and the Bible, of Abraham’s willingness to sacrifice his son, but Latif typically widened his scope.

“The focal point is the slain sheep, representing not only Abraham’s iconic sacrifice submitting his son to God,” Latif explained, “but the many other sacrificial lambs we find in past and recent history, for example, Christ, Imam Husayn, George Floyd and so on,” referring to the first leader of the Shia sect of Islam and Floyd, the man murdered by police in Minneapolis in 2020.

Latif was in the middle of a doctoral program in religion at Boston University when she sold her first painting, itself inspired by a class she had enrolled in at Harvard. The teacher, Ahmed Ragab, historian, physician and documentary filmmaker (now at Johns Hopkins), gave the class the opportunity to complement a final project with a creative work.

Latif, who had painted for pleasure as a child, rendered the 15th-century Moroccan Sufi mystic Imam Muhammad al-Jazuli in a famous moment of ecstatic union with the Divine.

Five years later, Latif left academia to paint full time and is known for her unique and expressive style, which she calls “Islamic Impressionism”. She recently spoke with Religion News Service about her work, her childhood as the daughter of a Pakistani Muslim immigrant and a Russian-American convert to Islam, and the breakdown of distinctions between secular art and sacred art.

The following conversation has been edited for length and clarity.

Who chose the term Islamist Impressionism for your work?

I found it. I believe my works are unique from the dominant forms of Islamic art that dominate the visual landscape – calligraphy or hyper-detailed mosque paintings. I draw inspiration from Western Impressionism to convey Islamic concepts and ideas. I would not consider (my art) as “Islamic”. To me, that makes a hyperlegal or pietistic sense, and my art is definitely more transgressive.

“Islamicate” was coined by early 20th century Islamic historian Marshall Hodgson, and it perfectly describes what I do in my works. Hodgson used the term to describe social and cultural phenomena associated with the Muslim world. I will discuss apocalypticism or Islamic futurism and everyday Muslim devotional life. So I feel like it was a perfect umbrella term to capture what I paint.

It may be a bit of both. For some people, this would be considered an intervention. But I also feel like I’m conveying a truth that already exists for so many people. 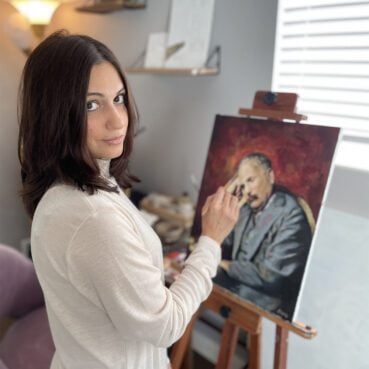 My father is traditionally devout and very pious, so I’m going to test it on him. The first thing he said (about “The Sacrifice”) was, “Well, you know, we don’t sacrifice sheep in front of other sheep – that’s against Islamic laws on ‘slaughter.” It was so funny. I had to remind him, it’s art. I am not trying to say anything about Islamic law. You have to kind of think beyond that.

There’s a push for animal rights in there. As a little girl, I visited Pakistan during Eid al-Adha. It is literally a bloodbath. You walk in the street, there is blood flowing everywhere, animals sacrificed in the street. You can smell that raw meat, blood in the air. I remember as a child, I refused to eat all day. I didn’t want to touch any meat.

I am not unique in this case. There are other Muslims who feel the same. Do we need to kill as many animals as we kill or sacrifice as many? So that was a message I was sending. And then beyond that, think about this idea of ​​sacrifice.

RELATED: In ‘Mrs. Marvel’, Muslim fans see a reflection of their lives

Has your art ever been considered “too religious” for the professional art world?

Oh, sure. I thought about it a lot because I would like to enter the gallery scene. Other artists that I follow, Christian artists, do similar things. by Gary Bunt the work is amazing. Any artist who dabbles in religion or religious themes in their artwork will hit a snag because most of what you see in the gallery world is ‘secular’ art.

How did your parents’ background shape your understanding of your faith?

I grew up very Muslim, going to the mosque every weekend. My community was predominantly South Asian and I was seen as the white girl. I also don’t see myself as a white girl, or a purely South Asian girl. But for them, I was white. I had one foot in this world, but one foot was outside of it. My mother, a Jewish convert to Islam, had my older sister (in her first marriage). This older half-sister is a Christian. I’m going to join her for Christmas. She was just there for Eid. She celebrated with my in-laws and we exchanged Eid gifts.

When you enter academia, you realize that much of what we believe about our religious traditions is socially constructed. (That’s not to say that what we believe isn’t true, but I think it lends itself to this idea of ​​human solidarity – like, we’re all humans at the end of the day, we’re all looking for the truth .

The Your Space series features black Muslim icons Malcolm X and Muhammad Ali. The first American Muslims appear in your Prayer on Plantation series. How were these two projects born? 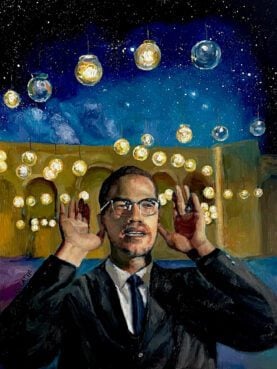 One of my academic advisors in my master’s program (in Middle Eastern Studies at the University of Texas at Austin) was scholar Denise Spellberg, who wrote “Quran by Thomas Jefferson.” His course on American Islam made me think of early American Muslims, who were African slaves. This started my Prayer on Plantation series.

When I think of a Muslim icon that shaped my teenage years, that would be Malcolm X. Muhammad Ali, he was winning battles and giving so much hope to Muslims around the world, especially at a time when, you know, they were suffering from turmoil social. -politically.

Often when I paint I listen to documentaries, a lot of space documentaries about NASA and things like that. I guess that carried over to my works. And it turned out that Malcolm X, Muhammad Ali, they were the perfect subjects. I think I will never tire of painting them.

How do you hope your art will be appreciated?

I hope I convey something universal – that sense of beauty, like any good work of art, but also that truth about human beings, about ourselves, and about our history. And I would not like it to be only this art which belongs only to the Islamic world. I hope it will be appreciated by others, non-Muslims too.

For Muslims, I hope this will broaden their understanding of Islam. Islam cannot simply be reduced to law, which much of it is today. If you look beyond that, you can have a more open view of Islam and you can be more accepting of the different expressions of piety and religiosity and the different ways of being a Muslim and inhabiting the world. 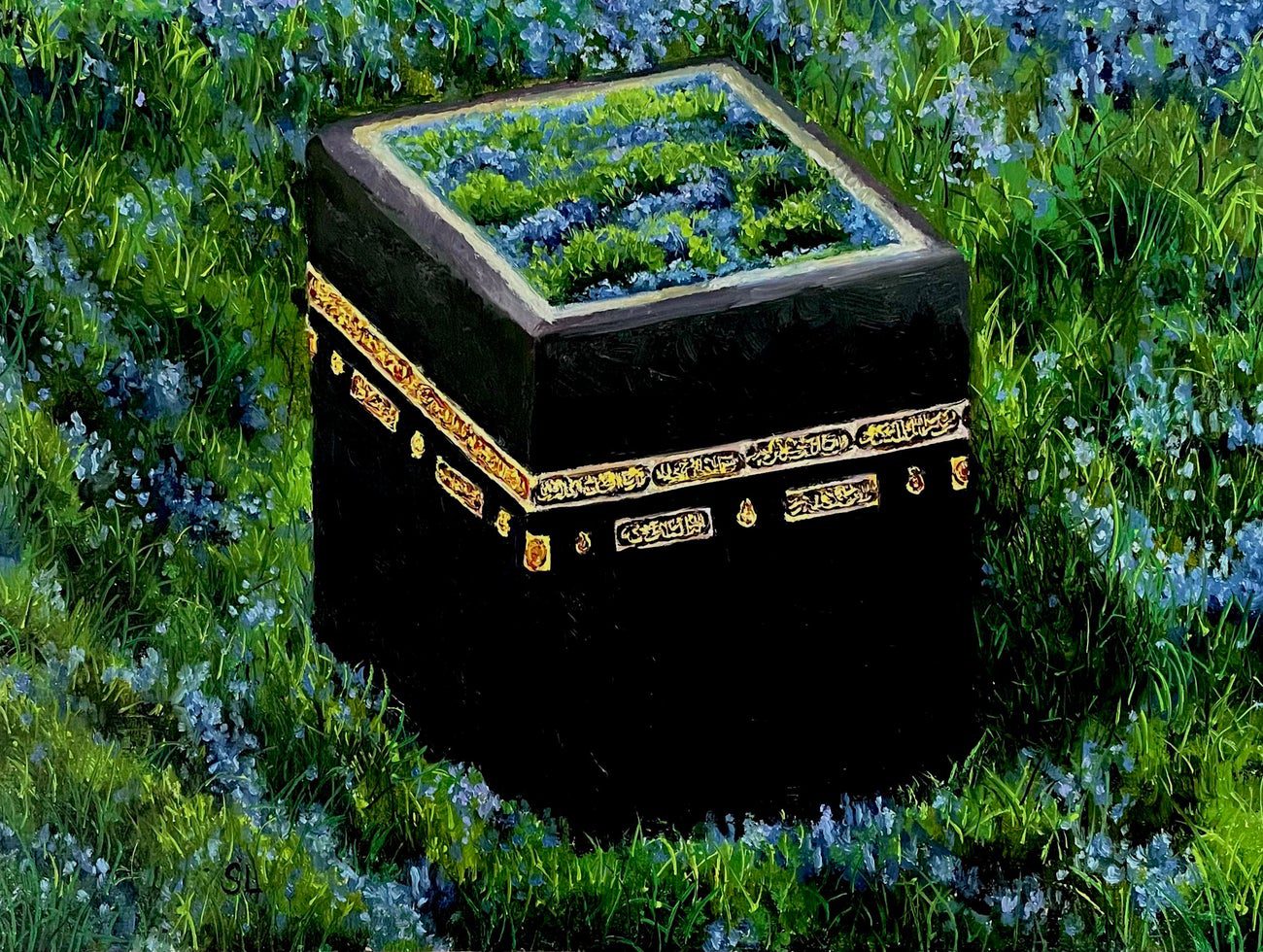