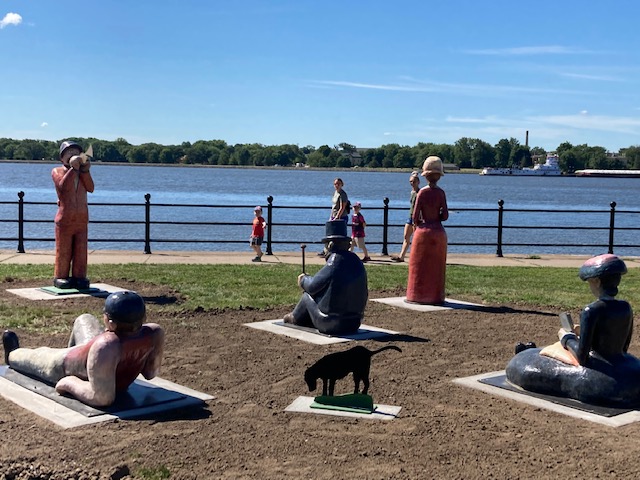 Just in time for Bix 7 and tonight’s free jazz festival in Lindsay Park, a new Instagrammable, selfie-worthy spot has sprung up in Davenport, and it’s beautiful.

In Lower Lindsay Park, village of East Davenport (south of River Drive and east of Mound Street), the ‘Sunday in the Park’ sculpture collection has a new home, relocated from Credit Island to the west of Davenport. The colorful fiberglass sculptures are based on figures from Georges Seurat’s masterpiece ‘A Sunday Afternoon on the Island of La Grand Jatte’ (1884-86), which hangs in the Art Institute of Chicago.

They create an artistic promenade along the Mississippi River, between the “architectural park” and John Bloom’s “Waiting for the Ferry” sculpture.

Kathy Wine, executive director of River Action, said Friday it was a joint venture between Davenport Parks & Recreation and River Action, to repair and restore the 12 sculptures and move them from Credit Island to Lower Lindsay Park this week. . She credited retired art teacher Jean Downey of Davenport for restoring the 22-year-old sculptures.

“It’s a great site because it sits between the John Bloom sculpture, the architectural park, and creates an artistic stop for art lovers, and it’s a Channel Cat stop,” Wine said of of the location by the river.

Having public art on the riverfront helps create a “sense of place, a sense of identity for our community,” she said. “He educates as much as he entertains. It is also something to delight and we know that this kind of investment in public art is something that will create more investment in our community. We celebrate that – we celebrate the networking and partnerships that we have in the community. »

“Public art enhances the places we call home and provides people with an experience, in this case, on the Mississippi River,” Wine said. “It also gives artists greater exposure and recognition for their work.”

The project (the first RiverWay artwork) began with Davenport artist Ted McElhiney, who oversaw the creation and production of the sculptures, placed on Credit Island in 2000, as it was an island in the river similar to La Grande Jatte in Paris for Seurat. .

The sculptures were made by Thom Gleich of Davenport, with the help of students from Davenport Central and Augustana who painted them with McElhiney and Ben Sunday, using techniques similar to Seurat’s Pointillism.

“Several of the statues were vandalized, and thanks to Jean, you see them in pristine condition today,” Wendy Peterson, a member of the Davenport Park Advisory Board, said Friday.

The historical significance of the sculptures is very important, as they reflect the Parisian personalities of the time. She quotes the artist: “I want to make modern people move in their essential features, organize them on a canvas by color harmonies.”

“Look at the variety of numbers that represent what the population looked like, when they traveled to this place west of Paris,” Petersion said. “Let’s celebrate and spread the word about what happened here.”

“It seems like the right place, on a body of water,” she said. “I’m so happy it’s here. It’s beautiful – walk past it, you can’t miss it. Everyone will say, what is it? Well, come see.

Downey, an art teacher and retired artist, repaired numerous cracks in the fiberglass sculptures and also replaced parts that had been stolen (including a book, a cane, flowers and a horn).

“It’s very exciting. I’ve been here a few days and the positive people coming through are great,” Downey said. night. It’s their first night in public. We’ve faced the worst so far.

Downey worked on the meticulous restoration for months at Credit Island, including new paint and varnish, and replacing the head of a sculpture that had been decapitated.

Among the acts of vandalism at Credit Island, the sculpture of the little girl was taken and placed in a bathroom, later found by a city employee, she said. Downey saw Seurat’s painting in person, which she called “incredible”.

“Sunday” was also immortalized on the Broadway stage by composer Stephen Sondheim, who collaborated with writer-director James Lapine to create the 1984 musical, “Sunday in the Park With George.”

Other RiverWay artworks include:

Tonight at Lindsay Park is the free “Heights of the Era” live music festival, from 3-10:30 p.m. For more on River Action, click HERE.

5 sculptures for ‘Summer of Stone and Steel’, unveiled at Juliet’s Tavern in Joliet – Shaw Local

Discover the magnificent paintings, sculptures, jewelry and ceramics on the Nidd Art Trail – includes Pateley Bridge and the churches of Summerbridge and Blubberhouses