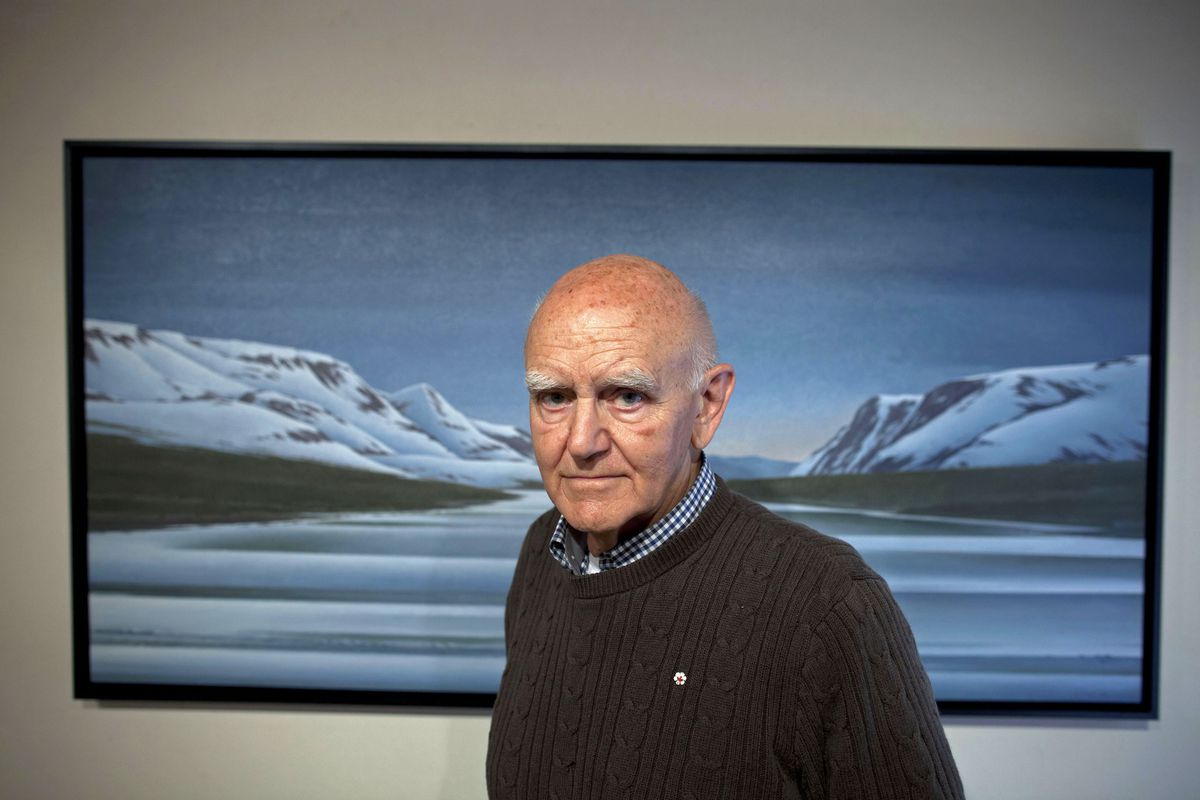 Painter Christopher Pratt captured the wilderness of his beloved Newfoundland

Christopher Pratt collected his HB pencils in jars when they were too small to hold – hundreds of them over the years, each ending in a sharp tip. The old glasses were pinned evenly to the studio wall. Gray floors and white walls, a wash of fluorescent light working in conversation with the windows above. The artwork throughout the space was in varying stages of development, his palette an ordered series of white, blue, brown, and a hint of orange.

The wicker chair in the painting Girl in a wicker chairby his late ex-wife Mary Pratt, was placed in his optimal sitting position to visualize his current project, circles drawn around each leg so he could be repositioned when moved. Asleep on the drawing board was the studio cat, Ophelia – so named, after being snatched from the Salmonier River, before he learned the cat was, in fact, a male.

On the bulletin board, a series of notes in his handwriting in capital letters: “That wide open field of associations and events that we call memories.” “The things I invite to haunt me.” “Life is not a rehearsal. It’s next year.”

Mr Pratt, who died on Sunday aged 86, was one of Canada’s most respected and important painters. Devoting his life to the act of looking, he revealed the island of Newfoundland to others through his art – making it visible without romanticizing it.

His works have come to symbolize the identity of his province and set a standard of artistic excellence. For many, it resonates as a true reflection of the province and its history. His art takes pride of place in the living rooms and kitchens of Newfoundland and Labrador, embedded in the psyches of those who grew up there. His design for the province’s flag, adopted in 1980, is tattooed on bodies and flutters in the front gardens, as well as fluttering in front of the Newfoundland and Labrador House of Assembly.

John Christopher Maxwell Pratt was born in St. John’s on December 9, 1935. He first recognized himself as an artist when he was bedridden in his youth and received watercolors to pass the time. He felt reassured when his first series of works sold, even more so when he won a prize in the provincial government’s Arts and Letters Competition.

Art was not considered a viable profession in Newfoundland in the 1950s, so he took up pre-medical studies at Mount Allison University in Sackville, New Brunswick. There he met fellow artist Mary West, who encouraged him to study art. Later, when they got married and she was pregnant with their first child, they traveled to Scotland, where he continued his education at the Glasgow School of Art.

In 1963, the couple moved to a drafty home in St. Mary’s Bay, Newfoundland, where they raised their four children: John, Anne, Barbara and Ned. He established his studio there and received his first solo exhibition in 1965, the year in which he became both an associate of the Royal Canadian Academy of Arts and a member of the Canadian Society of Graphic Arts.

In his work, Mr. Pratt’s images revealed his deep appreciation for the beautiful yet rugged nature of his beloved home province. His art combined a reverence for the language of painting with an embodiment of the intimacy of memory. Simplicity was a form of respect.

He has described his works as “coastal” – existing in the space where land meets water, between the abstract and the figurative, between the planned and the natural. They were a space in themselves. For example, it is only the hint of rust in his painting of the structures of the former Argentia Naval Station that reveals the sense of the passage of time.

The shape of things mattered: the movement of the seasons, the rhythm of the waves, the points of a compass, the quality of a name. He meticulously planned each painting with preparatory sketches, then let his intuition take over. If the waves or the stones of a landscape seemed to him too expected, he would start again.

Mr. Pratt was made an Officer of the Order of Canada in 1973 and elevated to Companion in 1983. The award citation said of his art that “its geometric simplicity and clear tones have not only become l classic expression of Newfoundland and Atlantic Canada, but achieves a degree of poetic insight and a quality of universality that is widely esteemed in Canada and abroad. In 2018, he received the Order of Newfoundland and Labrador. He proudly wore the pins of both honours.

During his long career, he has been the subject of several major publications and exhibitions, including a national traveling retrospective in 2013 organized by the National Gallery of Canada and a 10-year retrospective in 2015 at The Rooms, the St. John’s Cultural Complex. which includes the Provincial Art Gallery.

Throughout his career, he revisits his images to create new works. He constantly sought to grasp the reality of an experience, not by facsimile, but rather by the idea we had of it. With each examination, he watched the memories accumulate. As he wrote in 2002: “The images I make are of places I have been, in this strange space between reality and invention, and increasingly they come to represent real places, a celebration of gift of being here and there. .”

His 47-year marriage to Mary Pratt ended in divorce in 2004. He reconnected with her in the last years of his life and in 2018 painted Trongate Summary: Art School Treee, which marked their stay in Glasgow. Mary died during the process, and a large fire destroyed the building depicted. On the back, he writes: “In memory of Mary. 1935: 2018.″

The visit to his workshop was a tour of stories. He would talk about his current art project and then move on to the walls and shelves – his memories. As he walked down the studio hallway, he identified sticks and stones he had collected all over the island. Walking further toward the large windows that overlook the nearby Salmonier River, he pointed to a wall with neatly arranged photos and objects: his pre-Confederation Newfoundland birth certificate, photos of friends and family, a photo of his son Ned placed with pride. He’ll guide you through his classmates’ collection of images from Holloway School, Prince of Wales College, Mount Allison and Glasgow School of Art.

Throughout his adult life, Mr Pratt could endure a trip off the island for up to three days. And yet, in the last two decades of his life, he repeatedly traveled across the island of Newfoundland.

He remarried to Jeanette Meehan, his traveling companion for most of this period, until their divorce. With her, and later with others, he continually returned to sites of personal importance to him – what he described as “places of memory”. He documented these “nostalgia trips” in photographs and in “carbooks” – journals in which he noted weather conditions, the feel of the sun on his hand, wildlife sightings and conversations with locals. travel companions.

A road trip could take him up to 3,400 kilometres: from St. John’s to Grand Falls-Windsor, then through the inland mining town of Buchans, to Corner Brook, to Benoit’s Cove at night, on the Burgeo Road, along the old road on the Great Northern Peninsula, through Gros Morne National Park, then Stephenville, around the Port-au-Port Peninsula. If he had time, he would visit Cape Anguille, the most westerly point of Newfoundland. Each of these places linked to his life or his family history. Each of them was a place he had painted.

Along the way, the philosophical discussions quickly turned into puns. The silence was punctuated by the naming of each river, each bridge, while predicting the next. It detailed the history of this province – its politics, its changing infrastructure, its industry. With each sighting of an animal or a bird, he spoke with admiration of his eldest son’s considerable knowledge: “I don’t know what it is, but John would know. He can tell from afar.

Mr. Pratt points to the one window at the Deer Lake Powerhouse that is smaller than the others. Each time he noticed the arrival of Venus in the sky and shared his comfort of the headlights leading the way as the darkness closed behind him.

He said that Newfoundland did not exist exactly as he described it: “I paint on a place, not on this one”. And yet, when a familiar building was destroyed, he sought it out. When a favorite tree seemed to die, he mourned it. “It’s not about beauty,” he once told this writer as he explored the aging and practical Buchans mining infrastructure, “It’s about presence.”

Despite all of his accomplishments, Mr. Pratt described his art as ordinary. He treasured the studio buzz, his conversations with his longtime assistant Brenda Kielley and her daughter Anne Pratt, who was his carer in his final months. He welcomed everyone who came to visit him, be they politicians, artists, neighbors or friends. When he is alone, his workshop becomes a workspace. He continued to paint well into his senior year.

Along one wall of the studio was a large unfinished canvas. He had penciled in the lines of the Deer Lake Generating Station with the intention of revisiting his original image. Rather than at night, the structure would be shown at sunset, with the water below at full speed. The canvas had been there for years, frozen by what seemed like a fear of denouement, but he described its unfinished state as a “saver of time”. At his age, he explained, it was more practical to create several small paintings than to waste a year on one large work.

In his last days, he erased his drawings as he made them. Towards the end of his life, he visited The Rooms to see two things that had great meaning for him: the last known example of the Newfoundland wolf and a group of paintings by his daughter Barbara. He proudly spent time with everyone.

Predeceased by his ex-wife, Mary West Pratt, in 2018 and an infant son in 1975, Mr. Pratt leaves behind his children, John, Anne, Barbara and Ned; 11 grandchildren; three great-grandchildren; his brother Philip; and his assistant, Brenda Kielley.