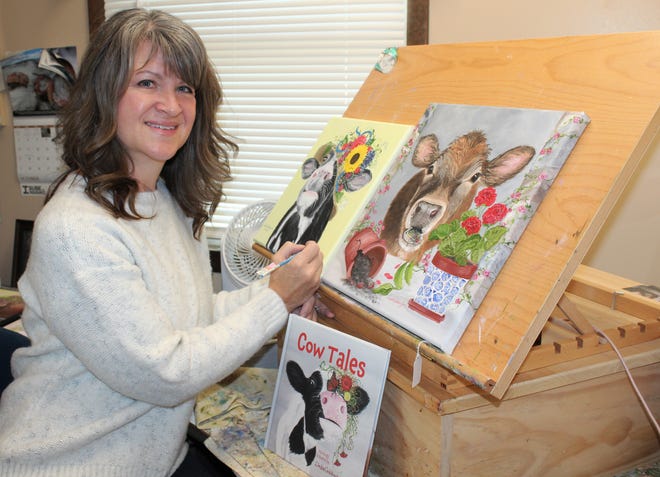 There are famous cows that live on the Salco road near Berlin.

It is because the oil painter Linda Coddington who lives near Macdonaldton has written and illustrated a children’s book called “Cow Tales”, which features 10 cows living on Pennwood Farms owned by the Stoltzfus family. Now the portraits of these cattle have been commemorated in a special and fantastic way with bonnets, sunflowers and even a flag and a butterfly. In order to bring their images to life, Coddington spent time at Stoltzfus Farm taking photos and spending time with the cows.

Georgian Place will become the headquarters of Somerset Trust

Coddington will take part in the Christmas on the Corner event at the Cup of Soul Cafe on the Upper Diamond in Berlin on Friday, Saturday and Sunday, and do a book signing from 10 a.m. to 6 p.m. Saturday at the cafe.

“I painted a cow for my daughter for Christmas last year and it was fun,” Coddington said. “Then the first cow in this book is ‘Rosey’ and I painted her in March. I was only going to paint one and I probably painted six before I started thinking a calendar would be cute and when I got to the tenth cow, we said, ‘Let’s make a book.’ It all came together after that.”

Coddington had illustrated another book called “The Forgotten Bear” by Penny Knobel-Besa of Flintstone, Maryland. Knobel-Besa had been writing the book for a very long time, but it was only after seeing Coddington’s painting of a Berlin Christmas that she decided to complete the project.

“When Penny saw this painting, she realized it was the Christmas village she had imagined for her book,” Coddington said. “I did a series of paintings for her and we put them in her book.”

In recent years Coddington has painted many local sites, such as Pack Saddle, Burkholder and the covered bridges of New Baltimore here in Somerset County, as well as the old barn at Ponfeigh Farm and Mount Olivet Church, all two near Glencoe, Uptown Somerset decades ago, the city of Berlin and even historic mansions.

Her works have generated quite a few followers on her Facebook site at Back Road Reflections and she has also participated in exhibitions at galleries selling her paintings and prints.

However, a random cow painting she did years ago has always been popular, and she thought of doing more of it at some point. After starting this series of cow portraits for a calendar, the idea for a book and the words for the rhymes just started flowing. One day after a walk she came home and started thinking of poems to go with the cow painting and the words came to her. Then she started painting more cows and started writing more poems. Palmetto Publications in Charleston, South Carolina just released their book “Cow Tales.”

Over the past four years, Coddington has devoted herself to a passion that began in her youth but was later put aside to work and raise a family.

“My mum (Helen Hoyman of Salco) bought me my first set of oils at the old Newberry’s (Uptown Somerset department store) when I was 13 for Christmas,” Coddington said. “Since then I’ve been hooked, but sometimes life got in the way of my art.”

Do you know your local history? Test your knowledge with the Vintage Somerset quiz

Linda graduated from Brothersvalley High School in Berlin in 1988 and started working for the National Bank of Western Pennsylvania in Berlin until she was 25, then quit her job to stay home to raise a family.

His children are Heather Little, 33, of Michigan, and Courtney Engleka, 29, who is married to Aaron Engleka, of Berlin, and they have two children, Ellie, 5, and Chase, 3.

“I painted whenever I could,” she said. “I painted gifts for people by painting slates and a picture I painted with a dollar got a lot of attention and everyone wanted one. But then there would be years that would pass and I wouldn’t paint anything because I was busy raising kids and working again. There were always football games and activities for my daughters and there wasn’t enough time but I always missed painting in my heart.

Linda married Jeff Coddington in 2005 and the couple reside on Slate Hill Road off Huckleberry Highway near Macdonaldton.

In 2019, Jeff and other family members encouraged Linda to quit her job and pursue her passion for painting. So she left Sube Insurance where she was working at the time and started painting. She never looked back and says things are starting to fall into place now.

“What I love the most is when someone is touched by one of my paintings,” she said. “Sometimes I get up at 4 a.m. and I’m in my studio when my husband goes to work. I try to limit myself to five hours a day and then I’m going to be with my grandkids. With everything that’s going on happening in the world today I paint and what I love the most is when someone understands my art and it has meaning to them Cows make people smile It’s a children’s book but it makes adults happy too.