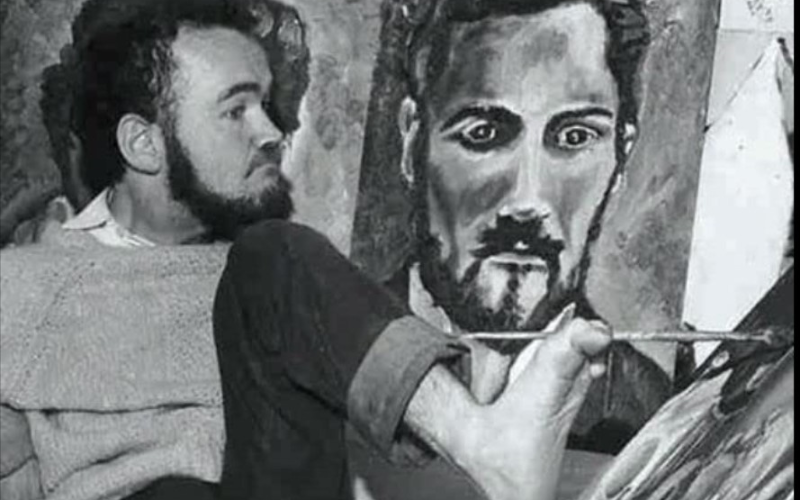 Irish artist and writer Christy Brown, who died on this day September 7, 1981, is remembered by many as a character played by Daniel Day-Lewis in the movie ‘My Left Foot’.

But Christy Brown, the writer and painter deserves closer inspection than a movie can afford. The complexities of his life, as well as his struggle to be understood – and taken seriously – have only recently come to light, even as they underlie everything he has created.

Christy Brown was born with cerebral palsy. The condition was isolating but it also informed his determination to become a singular chronicler of the human spirit. He produced hundreds of paintings in addition to writing over a thousand letters, a classic memoir, four novels and four books of poetry – all with the toes of his left foot, the only limb on which he had a muscle control. So how did he manage to achieve all of this?

Christy Brown was born on June 5, 1932, after a three-day labor at Rotunda Hospital in Dublin. He was the twelfth of twenty-two children born to Bridget and Patrick Brown, thirteen of whom survived. The Browns lived in a small terraced house. Christy’s father was a mason and several of his sons followed him into this profession. When asked by a reporter if he ever wondered what his life would have been like without his “terrible disability,” Christy laughed and replied, “I know. I would have been a good mason like my father.

Christy’s mother struggled to get a diagnosis of Christy’s condition. It was later determined that Christy was “mentally retarded” who needed to be placed in an institution. Parts of his brain were damaged due to lack of oxygen at birth – but, although physically weakened, his mind was functioning perfectly. Bridget insisted he would not be fired. Her daughter Anne later said that Bridget “always knew there was something out there; she saw that light in his eyes. And she brought out that luminosity, that spark.

At the age of five, Christy snatched a piece of chalk from her sister with her left foot and began to write with it. Christy never had a formal education, but with the support of his mother, he gradually learned to write and communicate. Bridget also provided primary care for Christy, while raising twelve other children and struggling to make ends meet. (When actress Brenda Fricker won an Oscar for her role as Bridget Brown, she said, “Any woman who gives birth to twenty-two children deserves one.” Christy reportedly agreed. He dedicated the book which the film is based on in Bridget.)

As a child, Christy would go on mischievous escapades with her siblings in her “char”, a go-kart called Henry. They gave him a cigarette – which he ate whole – and used Henry to hide some stolen fruit when the police came by. A few years later, Christy learned to use a brush between her toes.

Katriona Maguire (née Delahunt) was training as a social worker at Rotunda Hospital when she met Bridget, who was recovering from the birth of her thirteenth child. Katriona was fascinated by Bridget’s stories about Christy and went to visit the boy who was painting with his toes. Christy fell in love with Katriona. It was with her encouragement and financial help that he made his first trip abroad, to Lourdes, in 1948. Katriona would support Christy throughout her life; their letters bear poignant testimony to a long and remarkable friendship.

At the age of eighteen, Christy decides to write the story of her life. It took him four years to complete. After giving up the use of his left foot, he had to lean on a scribe. His siblings reluctantly did most of this work. Christy’s sister Ann remembers being kicked with her left foot every time she misspelled a word.

After writing 400 pages of “Memories of a Mentally Retarded”, Christy turned to Dr. Bob Collis for help, unaware that he was a published writer himself. After skimming through the lengthy manuscript, Collis discovered a phrase he described as “a rose among many weeds”. Collis agreed to help but demanded that Christy first read someone more modern than Charles Dickens.

Collis and Katriona Maguire arranged for Christy to receive a basic education through the local church. He also started speech therapy with Dr. Patricia Sheehan, which improved his ability to communicate with people outside his family. Christy finally finished her memoir at the age of 22, but not before kicking her brother Francis out of the study, ripping off his shoe and sock, and writing it all down with her left foot.

Christy Brown and “My Left Foot”

“My Left Foot” was published in 1954. Christy was soon to become internationally recognized as a writer of great distinction, although he came to regret My Left Foot and the fact that the world would remember him for “the story of the miracle”, rather than for more serious work. In 1956, he decided to stop his physiotherapy to devote more time to writing, but he also turned to alcohol, mostly in a pub in Kimmage with his family and friends. He would increasingly come to rely on drink, both to write and to reconcile with the world.

Christy recognized that he would never have the same talent for art as he did for writing, but he painted his whole life. He was an early member of Arnulf Stegmann’s Disabled Artists Association, which paid Christy a monthly sum in exchange for producing a certain number of paintings each year. He was frustrated with the time it took of his writing, but he produced hundreds of paintings that depict his struggles, epiphanies, and feelings of isolation as deeply as his literature, especially as he grew older. Several of these paintings are featured in the exhibit, Dear Christy – The Christy Brown Collection, which can now be viewed at the American Irish Historical Society.

Bridget Brown died in September 1968. Distraught, Christy buried herself in labor and completed her novel “Down All The Days” in 1969. The central character’s mother is heroic, but the novel explores troubling themes of violence household, poverty, alcoholism, and death – seen through the watchful eyes of the nameless, silent, crippled central character. Christy’s masterpiece is flawless in its depiction of working-class Dublin life while making insightful observations about the human spirit. Shocking, even groundbreaking, this remarkable novel has been widely praised in the literary world.

To promote the book, Christy appeared on the David Frost Show in New York in 1970. When asked what he would do now that he was a famous author, Christy gurgled his glass and said he would buy a pub. Later in the interview, he simply advised the show’s viewers to “love life.”

Women have played a key role throughout Christy’s life. He dedicated his first collection of poetry “Come Softly To My Wake” (1971) to his sister Ann, for “helping to keep the ship afloat”. His relationship with a married American named Beth Moore helped him maintain some stability while writing “Down All The Days”, and the book is dedicated to her “who, with such sweet ferocity, finally drove me to finish this book”.

Beth wrote to Christy in 1954 after reading an excerpt from “My Left Foot” in Good Housekeeping, and their relationship grew when Christy first traveled to the United States in 1960. Beth, her husband, and Christy were together in Ireland and America several times. , but the case was strained by the distance and the nature of the relationship. Christy severed all ties in 1972 before marrying Mary Carr, a decision that shocked many close to her.

The Christy Brown ending “My Left Foot” movie does not include

In the movie “My Left Foot”, Mary is a nurse who agrees to go out with Christy, and their wedding date appears onscreen before the end credits. The reality was rather more complex. Mary Carr reportedly had sex with both men and women, abused alcohol and prescription drugs, and rarely returned love to Christy because ‘she wasn’t that kind of person’, brother says de Christy, Sean. Her writing and painting suffered after a few years of marriage, and some critics have alleged that Mary’s inability to sustain her work led to Christy’s rapid decline.

However complex the relationship, it is certain that after his marriage to Mary, Christy succumbed to the isolation he had fought his entire life. She was often away in London, leaving Christy alone to complete her third book “A Shadow On Summer” (1973), which told the story of her romance with Beth Moore. The couple moved to Kerry in 1975 and Christy rarely saw her family. His novel “Wild Grow The Lillies” (1976) was not well received, and although he continued to write poetry, he would never complete another novel or play. During the last years of her life, Christy Brown led a troubled existence.

When he and Mary moved to England in 1980, Christy’s family thought he was missing. He became isolated, often sleeping alone downstairs. On September 6, 1981, Christy choked while having dinner. He was 49 years old. His family members – particularly Ann, who had taken care of him and knew how easily food could get stuck in his throat – blamed Mary’s drinking and neglect. On hearing of her death, Irish writer Ulick O’Connor observed: “Christy’s roots were in Dublin and he needed the oxygen of family life and his own people around him to allow him to breathe. .”

Although the end of Christy Brown’s story was tragic, her work and even her life remain an inspiration. In addition to producing revolutionary literature, he testified to what humans are capable of in the face of adversity. However, it is important to remember him as a talented artist and writer.

Fortunately, there is no danger that Christy will be forgotten. He is celebrated in Ireland and around the world, remembered in songs by U2 and The Pogues, and immortalized in the Oscar-winning film ‘My Left Foot’.

* This article was originally published in November 2015 to coincide with an exhibition called “Dear Christy” created by The Little Museum of Dublin.