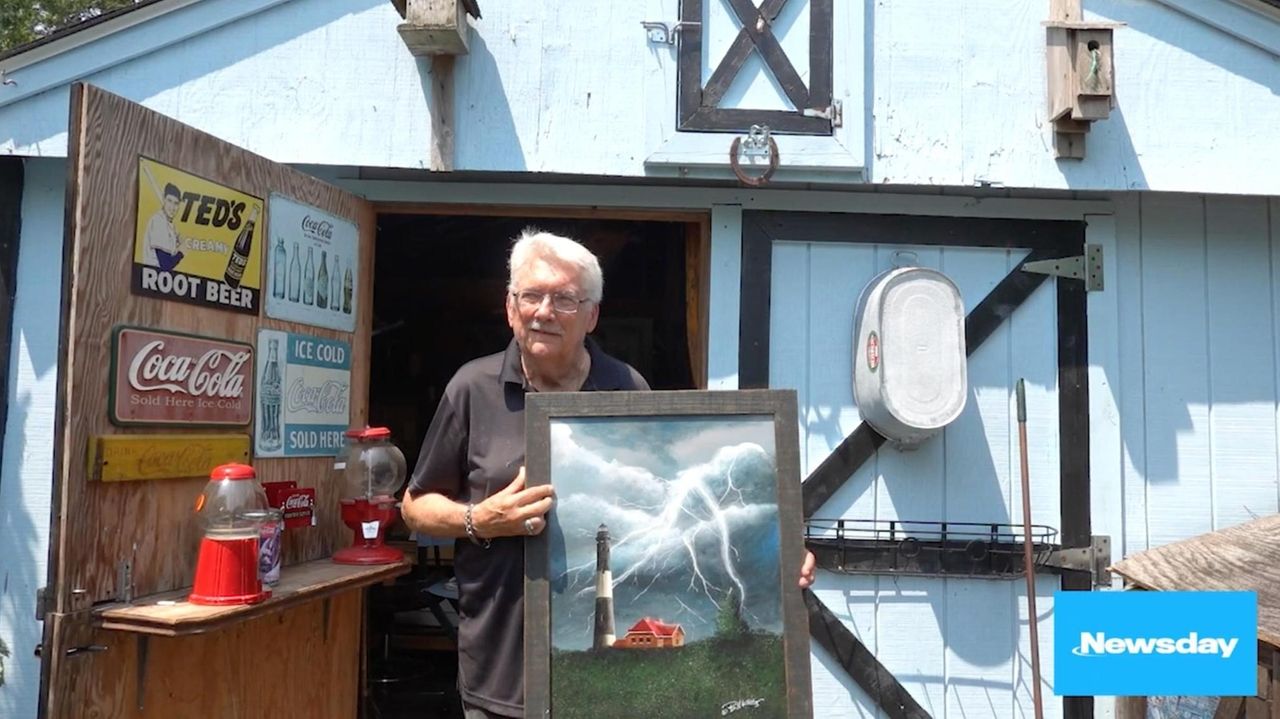 Bill Kuchler is an introvert, except when it comes to discussing his painting – something he has done for as long as he can remember.

â€œI’m very happy to be on my own, painting the barn,â€ said the 74-year-old former creative director who now spends much of his time in the converted 11/2 car garage at the end of its driveway. which he calls Blue Barn Studio.

Since retiring four years ago, Kuchler (pronounced kook-ler) has developed an audience for his acrylic and watercolor scenes of rustic America through works on display in art museums, libraries and gift shops. from Long Island. But most people find out through his Facebook page, facebook.com/BlueBarnStudio, often making appointments to visit the studio to purchase originals and prints of his favorite subjects: barns, lighthouses and up-close scenes of rural life.

Among her fans is artist Holly Gordon, who has included Kuchler’s paintings in two exhibitions she has curated for the Islip Art Museum. â€œThere is something very calm and sensitive about her nature, and I think that comes through in her works,â€ she said. “He’s quite versatile and his work is realistic and has a wonderful sensitivity. He’s very sensitive to being a Long Islander and his surroundings.”

The Brooklyn native grew up in Richmond Hills, Queens. When he married 54 years ago, he and his wife, Dorothy, lived in Whitestone before moving over half a century ago to a house with a sprawling, leafy backyard in West Islip .

â€œPainting has always been a part of my life since I was a child,â€ he said. â€œMy father painted, but he was not a painter, he worked in a factory. But he was a magnificent painter. Proof of this is on the walls of Kuchler’s studio: a bust portrait and a reclining nude of his mother painted by his father, Kurt.

â€œThere was always a drawing board for painting in our house,â€ Kuchler recalls. â€œI thought everyone had one in their house until I went to my friends and they didn’t. My influence was him and his painting. It made me want one. commercial artist career in advertising. “

Don’t miss a weekend in the East this summer. Everything North and South Fork straight to your inbox.

To pursue this career, he attended Thomas Edison High School, a business school in Queens, to take advantage of his business art classes. â€œIt was the breadth of my formal education, but I took classes at the School of Visual Arts and the Phoenix School of Design, mainly related to graphics and advertising. My first job was in a studio. ‘art in New York. creative work for an ad agency. I’ve spent my entire career doing that, commercial art as a graphic designer. “

Kuchler had painted as a hobby for most of his life, although he quit for over a decade about 20 years ago when “life got in his way.” He came back to it when his wife signed him up for a class with local watercolorist Bill Decker, and “I realized how much I missed it.”

Since his retirement four years ago, he has painted “whenever he has the chance and there are no chores to do”. He noted that his wife kept him busy helping out in their lush garden.

â€œI present myself as a painter of rural and rustic America,â€ Kuchler said. â€œSo it can be anything from a lighthouse painting to a barn or one of my favorite paintings of a rusty lock on a barn door. It’s the rust and the textures. raw wood which made it dramatic style I consider myself a sentimental painter so everything I paint has a sentimental feeling to me.

As for the subjects, “I paint what I like, whether they sell or not,” he continues. What he doesn’t like to paint are portraits. â€œI found this very unsatisfactory. What he likes, he says, are the landscapes and country scenes.

His customers love them too. His original paintings sell for between $ 300 and $ 1,000, but he prices most of his prints at $ 25 to keep them affordable.

His latest project is to try to paint all the lighthouses on Long Island. He did Horton Point, Huntington Harbor, Montauk Point, Cedar Point, Plum Island, Stratford Shoal, Little Gull, Bug Light, Orient Point, and several Fire Island tower scenes, leaving 11 to go. â€œI try to paint them all in a way you’ve never seen them before,â€ like Fire Island in the snow – the first in the series, completed about ten years ago. Another view of this lighthouse, on a stormy day with lightning in the sky, was a challenge. “I’ve never painted lightning before.”

A lighthouse painting provided perhaps his greatest claim to fame: Dan’s Papers on the East End contacted him to do a cover illustration for the Montauk Point Lighthouse in 2019.

Asked about his affinity for lighthouses, Kuchler said, “I think it’s their story, that these things have been there for hundreds of years. Painting lighthouses and their surroundings encompasses everything I love about painting. . It’s the textures, the story. “

A previous series focused on the covered bridges he saw on a trip to Vermont.

â€œI try to paint things that I have never painted before,â€ Kuchler said. â€œWhen I start a painting, I think to myself, ‘I can’t wait to see how I’m going to do this.’ â€œUsually he starts with a sketch and accumulates as many reference material as he can.

Self-proclaimed introvert, Kuchler demonstrates his sentimental and emotional side by talking about a favorite painting, a recent watercolor. “It’s just a picture of a swing in front of a tree. It’s in my backyard and this swing has been there for 50 years,” he said, choking as he remembered his children and grandsons. children playing there. “It’s like a family heirloom. The first year we moved into the house, the first thing we wanted to build was a swing.”

Even on days when he is busy with household chores, Kuchler tries to paint at least a few strokes. â€œI love food. I love my family. I love having a drink every now and then and I love painting, but everything is not in this order,â€ he said.

He creates in the cramped and overcrowded garage transformed into a barn. Almost every surface is covered with something: paintings of lighthouses, barn doors, porches and landscapes. There are also covers of newspapers of important events that he has collected since the 1950s, Superman comics, baseball mittens and memorabilia, covers of Benny Goodman and 1960s folk music albums. and concert posters of Pete Seeger and Harry Chapin, a milkshake mixer and other accessories from Woolworth’s soda fountains (because his mother was a waitress) and shelves of art books.

The studio’s most unusual feature is a barber’s chair resting prominently in a corner near the front door. â€œI’ve always wanted a barber’s chair,â€ Kuchler explained. â€œThey were having an auction in Babylon and I told my kids about it, and a week later they brought the barber’s chair. The kids joined in and got it for me. I sit in it and I listen to music for inspiration. “

In the rafters is an old suitcase his wife gave him for Christmas (and on which he puts travel stickers), an old wooden sled and other Americana. â€œIt’s hard to explain to our friends that this is the kind of thing that makes me happy,â€ he said.

At least he doesn’t have to explain his attraction to painting to his wife and kids – they’re creative too. His wife, whom he met while studying at the Cato Rose Institute of Art in Queens, paints and creates stained glass and other crafts. Among their children, Scott is a musician, Adam is a woodworker who makes furniture, Lucas draws, Noelle is a writer and does theater, and Amber is a singer and dancer who has also done theater.

Kuchler and his wife like to be busy with their artistic pursuits. â€œI love him and I love him to be happy with what he’s doing,â€ Dorothy said.

By Bill Bleyer
Special at Newsday

Thirty years of the Torres García museum, the Uruguayan painter who revolutionized art