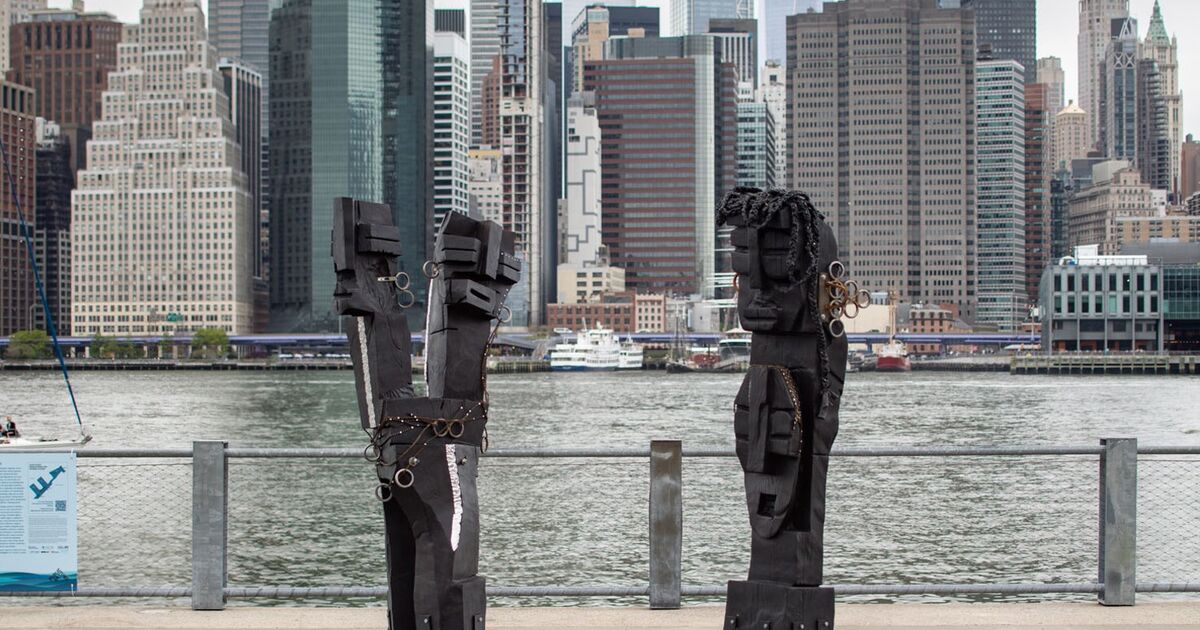 Leilah Babirye’s summer on Fire Island in 2015 was an unrealistic entrance into the United States. The artist had traveled from his hometown, Uganda’s capital of Kampala, to the remote queer haven of Long Island to attend the Fire Island Artist Residency. “I thought ‘wow this must be America, people are all generous and forgiving’,” Babirye recalled. “Just outside in New York, I realized everything was different; finding a studio and accommodation was very difficult.

Since then, however, numerous changes have only advanced Babirye’s career: the United States granted him asylum in 2018 due to the life-threatening conditions faced by the queer community in Uganda; a series of critically acclaimed exhibitions with his New York and London galleries, Gordon Robichaux and Stephen Friedman Gallery, respectively cemented his status as a sculptor to watch on both sides of the pond; and last year Celine’s creative director Hedi Slimane commissioned the 37-year-old to make a sculpture for the French fashion house’s new London boutique. In addition, the artist recently received his green card.

Babirye’s ceramic and wooden totemic sculptures embody the unrecognized struggles of queer people in Uganda. From his Brooklyn studio, the artist sculpts these works, meticulously imbuing them with both transhistorical and transatlantic narratives, including Uganda’s current and severe crackdown on the LGBTQI+ community. (Gender fluidity was culturally welcome in this East African country until British rule imposed Victorian morality in the late 19th century.)

Today in Uganda, although every newborn baby is given a name at birth based on the clans of the Buganda kingdom, being exposed later in life results in many being ostracized from their families and denounced for their clan names. Babirye’s wooden sculptures and ceramic busts each have a clan name and represent many people whose stories remain unknown, both in the country itself and internationally.

Seven summers after his very first experience in New York, Babirye is far from needing a helping hand. Two of his sculptures in wood and mixed media, entitled Agali Awamu (Ensemble) (2022), are presented in the new group exhibition of the Public Art Fund “Black Atlantic”. Co-hosted by artist Hugh Hayden and Daniel S. Palmer, the show runs through Brooklyn Bridge Park until November 27, 2022.

Perched along the East River on Pier 1, Babirye’s burnt and polished figures eclipse the Manhattan skyline with their postures and elaborate jewelry made of metal and found objects. Reaching around nine feet in height, they tower over passers-by, not only in their size but also in their radiant depictions of the body as a totem of transcendence – and in particular, of queer joy.

“The project inspired me to read more about the history of slavery in America than ever before and opened my mind to its many details,” Babirye said of the show, which draws its title of British sociologist Paul Gilroy’s book of the same name. The thread she found between her sculpture practice and the history of the slave trade across the Atlantic was a sense of unity: “My work is about different forms of families and groups of units, much like those many slaves had to build on each other to survive. .”

While his larger-than-life sculptures in Brooklyn rival the gigantic skyscrapers of downtown Manhattan, the tallest of them exhibits another work by Babirye on the top floor. The exhibition “Moleskine Detour New York” at One World Observatory includes the artist’s interpretation of a Moleskine notebook with 74 other artists. The pages of Babirye’s book, titled I worry about youare burned around the edges into a cinder stain and a fiery silhouette, paying homage to the same struggles that she encapsulates in large-scale sculptures.

Leilah Babiyre, I worry about you2022. Courtesy of Moleskine.

Some may know Babiyre for its ceramics. Unlike the immediacy of woodcarving, working with clay leads Babirye “to stop and wait patiently”, she said, adding that she enjoys the meditative process. Babirye’s summer, however, is far from running out of steam.

Beyond the city, her work is also included in two women-focused group exhibitions in museums. The first, “52 Artists: A Feminist Milestone,” runs at the Aldrich Contemporary Art Museum in Ridgefield, Connecticut, from June 6 to January 8, 2023. The exhibition, curated by museum curator Amy Smith-Stewart and independent curator Alexandra Schwartz, is a recreation of The Aldrich’s seminal exhibition, “Twenty Six Contemporary Women Artists”, curated by Lucy R. Lippard in 1971. In addition to works by artists from the original exhibition, it features pieces by ‘a group of 26 contemporary artists who have had defining moments over the past decade.

For “52 artists,” Babirye created an eight-foot-tall sculpture wearing a crown, “almost like a pope,” she explained. The piece will be exhibited alongside works such as Howardena Pindell, Adrian Piper, Alice Aycock and Mary Heilmann. Babirye expressed her excitement to show with “26 amazing artists from another generation”, she said, as well as her curiosity about what her peers have created using different contemporary technologies.

Meanwhile, in the Hamptons, Babirye’s work is featured in “Set It Off,” curated by Mickalene Thomas and Racquel Chevremont at the Parrish Art Museum, on view through July 24, 2022. There, her sculptures, adorned with materials found, such as packaging and bicycle tires, are featured alongside works by his contemporaries such as Torkwase Dyson, Kennedy Yanko and Kameelah Janan Rasheed. Diverse in their approaches to their work, the global concert of artists testifies to a desire to delve deeper into materials and open conversations with their environment.

The show also resonates with the storytelling embedded in Babiyre’s work. “I went to bed every night with stories my grandparents told me, so maybe there’s something borrowed from that time,” Babirye recalls. “But ultimately what drives my work are the West African masks which were all created for a purpose – and likewise my work has a purpose, the purpose of symbolizing the community in which I believe.”