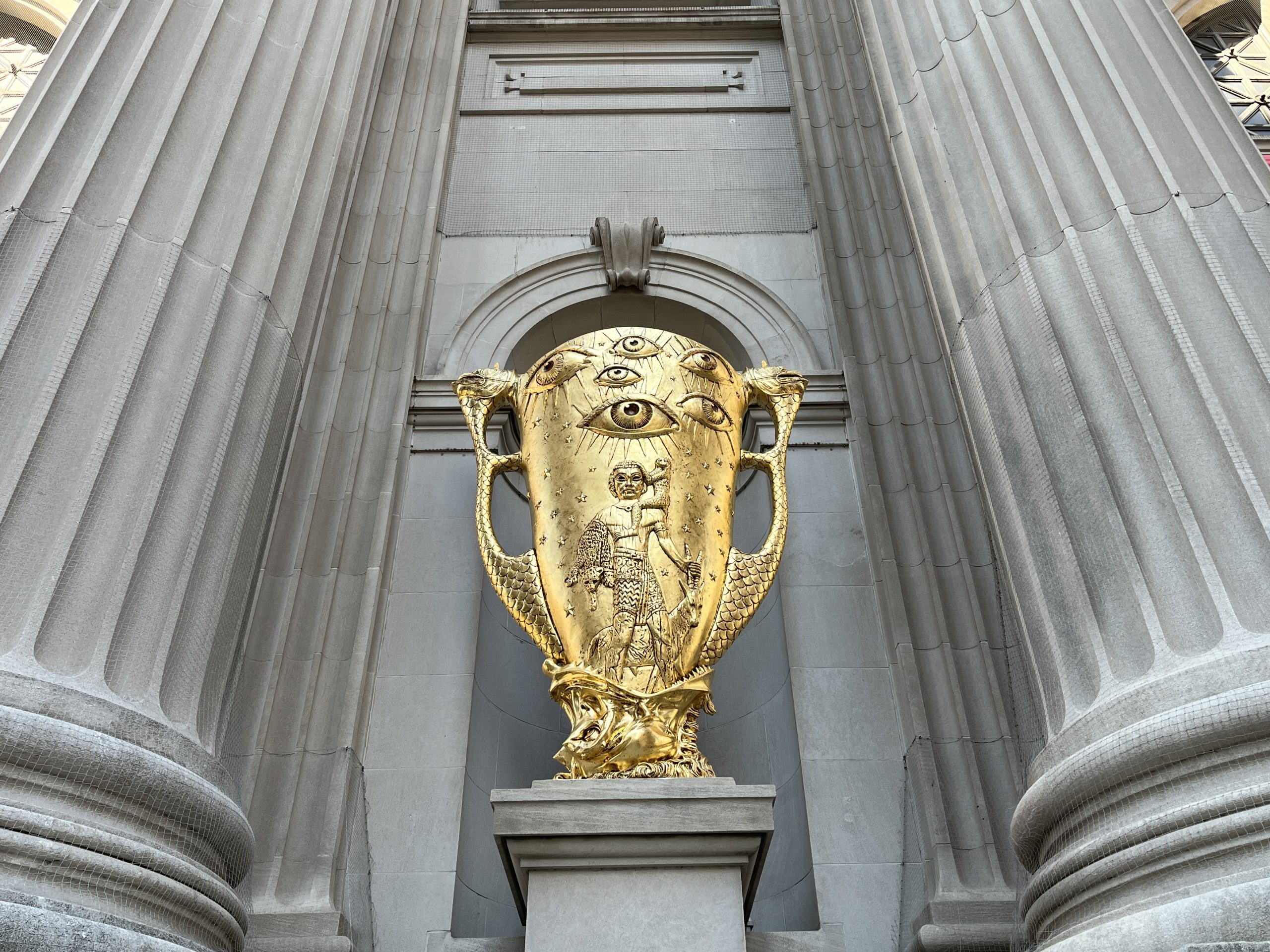 On a sunny but cool New York morning yesterday, the Metropolitan Museum of Art unveiled a quartet of gilded sculptures by Guyanese-British artist Hew Locke, set against niches in the facade of its Fifth Avenue building. Locke is the third artist to participate in the museum’s Facade Commission, launched in 2019, arriving on the heels of installations by Carol Bove and Wangechi Mutu. His site-specific works are shining trophies, created in dialogue with items from the museum’s collection that are tied to stories of conquest, plunder and other forms of imperial violence. I’ll say it right away: the works are imposing, thought-provoking, majestic and impossible to ignore. They are indeed magnificent.

Around noon, a cloud opened the way for the sun to shine directly on the golden sculptures, setting them ablaze. “Look at this; it’s almost blinding,” Locke told me in front of one of the sculptures, as we both took in its glow.

Locke named the series Golden, which is also a pun on guilt. Who should be prosecuted for the looting and looting of gold and other treasures from the countries of the South? You know who. But it’s not that literal. “This is not an anti-empire or even an anti-Met article,” Locke explained.

“What I’m trying to do is make people wonder about the stories behind these objects in the museum’s collection and how they got here,” he continued. . “The Met building itself is a trophy. It’s a New York trophy, an American trophy.

The sculptures on display include a pair of large trophy cups, flanking the museum’s main entrance, and another pair of smaller trophy fragments. The rooms themselves are just trophy facades supported by metal beams. This is because Locke is not concerned with monumentalizing, but rather with reacting, problematizing and deconstructing surviving monuments. Look, for example, at his recent project in Birmingham, UK, where he built a ship around a public statue of Queen Victoria and surrounded her with five smaller replicas of herself. It was a direct attack on the empire.

All pieces feature Domenico Guidi’s sea monster Andromeda and the sea monster (1694) at their bases. Greek legend says that Andromeda, the daughter of the Ethiopian queen Cassiopeia, was chained to a rock and nearly devoured by a monster because her mother kept bragging about her daughter’s exceptional beauty. It’s a story about the dangers of pride. For Locke, the sea creature’s gaping mouth also symbolizes the monstrous appetite of colonialism and modern consumerism. The handles of both trophies borrow the reptile pattern of a goblet from the Byzantine section, which may have been spoils of war seized by the Avars, a nomadic tribe of Eurasian warriors who challenged the Byzantine Empire, or a payment from tribute from Emperor Justinian. The handles also feature tiger heads borrowed from an 18th century flint that belonged to Tipu Sultan, the self-proclaimed “Tiger of Mysore” (he was famous for his passion for tigers). British soldiers looted the gun from the Sultan’s palace after killing him in 1799 at the end of the fourth and final Anglo-Mysore War against India.

There are two central figures in the complete trophies. One is from Assyrian spoils of war from the 8th century BCE depicting a human figure with an oryx and donkey on his left shoulder; the other is from a first-century BCE bronze figure of a Greek boy believed to represent Alexander Helios, son of Mark Antony and Cleopatra VII. The boy, who has been dubbed the “Prince of Armenia”, is dressed in an “exotic” oriental outfit. He’s plump, decadent, and obnoxious, like many of those princes and kings were.

But at first glance, the most stunning part of the trophies might be the pairs of eyes on each, with their pupils darting in all directions. “They are the all-seeing eyes,” Locke said. “We don’t know exactly what they are watching closely.” That said, if you look from the vantage point of the sculptures, you’ll see the Met’s mega-rich neighbors on Fifth Avenue, who are sure to have their own trophies.

The two distant fragment pieces, which may look like broken statues, also hint at imperial and colonial violence, but Locke said the idea behind them was also to encourage viewers to complete the sculptures in their minds.

With that, I asked a few visitors what they thought of the new facade control. “It’s not my style, but it’s definitely eye-catching,” said one woman, who wouldn’t give me her name. She was visiting the museum with her young daughter, who looked about 10 years old. “I like it,” the girl disapproved, but her mother pushed her away before we could talk.

“I like the choice of gold because it represents the excitement of all the wealth here,” said Wendy Welch, principal of the Vancouver Island School of Art, who was visiting New York from her hometown of Victoria in Canada. “The eyes say: we know what is happening.

I was also able to speak with a volunteer guide from the Met who was coming to work and asked not to be named as she is not authorized to speak on behalf of the museum. “It’s so beautiful to have the work of a Guyanese artist on the front of the Metropolitan Museum of Art,” she said. “That’s what’s so amazing. This would never have happened 20 years ago.

One thing is certain: the luminous surfaces of the sculpture caught the attention of most visitors. I asked Locke if we should be afraid of gold. It’s a strange question to ask, but it seemed necessary given all the historical associations of this precious metal. He replied in a resounding tone “NOPE.”

“Gold is beautiful. It is to be admired. It shines like the sun,” he said, pointing a finger at the midday sky.