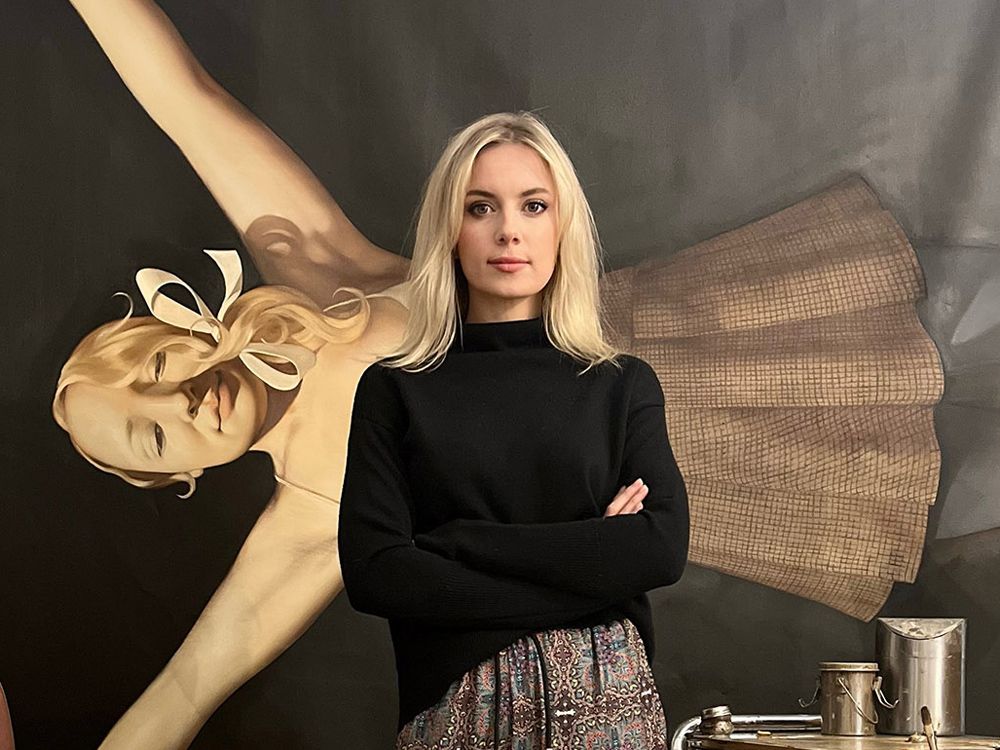 A 27-year-old Calgary-born painter billed as the new darling of the New York art scene is enjoying a meteoric rise to fame.

Three years ago, Weyant’s figurative drawings and paintings were displayed on blankets and priced at $450 each at an “incredibly chill” art fair in the Hamptons, ARTnews reported.

Since selling the beach on Long Island, three of Weyant’s solo shows have sold out, the the wall street journal compared her to a long weekend profile to “Botticelli as a Millennial” and she recently became exclusively represented by the powerful Gagosian Gallery, whose 77-year-old founder, Larry Gagosian, Weyant is now dating.

The romance and significant age gap have been the subject of “sarcastic and jaded” remarks, said Weyant’s painting professor at the Rhode Island School of Design. WSJ (Weyant graduated from the school in 2017). Last August, the couple had been spotted on the beaches of Saint-Tropez.

“She’s smart and has that Midwestern reserve, and she doesn’t speak all the art jargon,” Gagosian told the WSJ. “I’m just trying to protect her from the big bad wolves.”

The profile detailed Weyant’s split from a former agent who bought him “Falling Woman” for $15,000 a year ago. Today, Weyant’s work queue has several hundred names and she is now gearing up for a solo show for Gagosian in New York this fall.

The daughter of lawyers, Weyant has described in interviews drawing inspiration from French painters for composition and Dutch masters for color palettes, as well as children’s books by Eloïse, Madeline dolls, New Yorker cartoons, the Grinch, her own life and her friends (she has a few that she paints regularly and placed third in the National Gallery of Canada’s “So You Want to Be an Artist?” teen contest for a portrait of his friend Isabelle).

She describes her childhood as “idyllic in many ways”, and his personality as outwardly a little bubbly. She went to a conservative school outside of Calgary, where the kids wore not-so-pretty olive-green uniforms (various shades of green are part of her understated palette). She is also fascinated by the “low-stakes trauma” of the preteen and teenage years. In “Welcome to the Dollhouse”, the dollhouse modeled after the one she owned as a child, a doll escaped through a window with a rope; another piece shows two skinny legs sticking out from under a bed. Another doll is sitting in an overflowing tub. “The works allude to a pervasive, realistic villainy hidden beneath distracting veneers”, writer and wrote curator Jens Hoffmann.

“Loose Screw” features a woman who bears a striking resemblance to Weyant captured in profile in a bar, smiling but looking slightly off balance, one hand bandaged. In “Falling Woman”, the character appears upside down, her mouth surprised open, her chest overflowing. Weyant’s characters are often heavy with cleavage or flowing hair.

She prefers dark greens and dark yellows to bright colors, told journalist and gallery owner Bill Powers “There’s a kind of stillness to my compositions that needs that kind of really muted melancholy tone.”

“Someone recently told me that my palette seemed dead to them. I took that as a compliment. I mean, I think they’re quiet, and I think silence can be powerful.

She likes “black and dark humor” and tragicomic narratives. “If there’s humor in my work, it probably goes along with some kind of weird misery,” she said. Paul Laster of Art&Objet. She began considering a career as an artist when “it occurred to me that I am otherwise untalented”. She was discovered three years ago when another New York painter she was then assisting posted some of his work on Instagram.

In New York, Weyant paints from his one-bedroom apartment on Manhattan’s Upper West Side. At the start of the pandemic, she moved back to Calgary with her parents, setting up a temporary studio using her mother’s serving trays as pallets. Oil paints take a long time to dry in Calgary, she told Powers. “It’s so cold and dry.”

She’s enjoying her rapid rise in the art world, she told Kelly Crow of the Wall Street Journal, but all she felt was “pressure” as Christie’s bids soared.

“The art world loves to devour its young,” art critic Jerry Saltz told the WSJ. “It can be difficult to paint with another voice in your head whispering numbers and prices, but maybe she can.”

Sign up to receive the best daily stories from the National Post, a division of Postmedia Network Inc.

Thank you for your registration!

A welcome email is on its way. If you don’t see it, please check your spam folder.

The next issue of NP Posted will soon be in your inbox.

We encountered a problem during your registration. Try Again