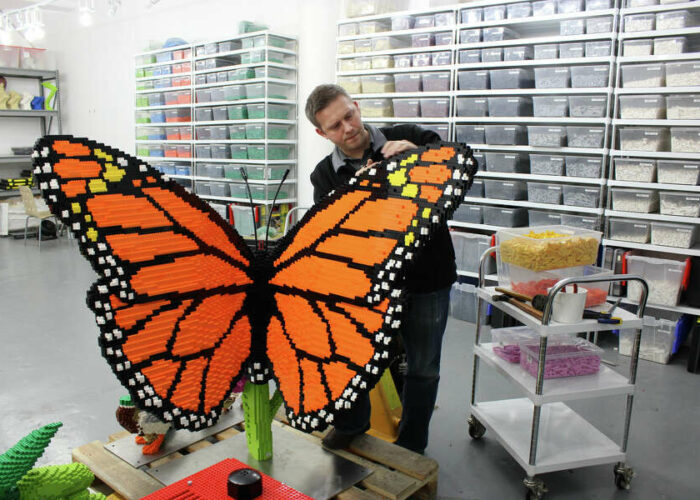 A 6-foot-tall hummingbird feasting on a gigantic orange trumpet flower — made entirely of Lego bricks — is one of 15 sculptures blooming at “Sean Kenney’s Nature Connects” at the Houston Botanic Garden.

Perched high in the air, the Ruby-throated Hummingbird is placed in the Susan Garver Family Discovery Garden near Thalia geniculata, a plant that hummingbirds feed on.

Claudia Gee Vassar of the Houston Botanic Garden said the placement of the larger-than-life Lego sculptures near representative native plants is intentional, in the hopes that visitors will be inspired to consider their own place in the ecosystem.

The show invites audiences to “take a closer look…it tells how everything is connected,” says Vassar. “We are all part of nature.”

Children enamored with the “incredible and ambitious” works may want to learn what they can plant at home to attract the same pollinators, she says.

“What we hope is that everyone who comes will deepen their connection to the garden,” she says, and “go further in their lives by taking care of our planet.”

Rich in detail, the Lego bird drinks nectar from flowers with pistils and stamens. It took Kenney, a New York-based artist, weeks to construct the 36,300-brick sculpture inside his studio.

With the help of his team, Kenney has hand-crafted dozens of nature-inspired Lego sculptures, which travel to sets across the country on a tour of botanical centers, zoos and other attractions. .

For its exhibition, Houston Botanic Garden has selected sculptures that best complement the natural environment.

Made up of 60,549 Legos, another show stopper is a brick-built monarch butterfly perched on pink milkweed.

Nearby, a praying mantis is made of more than 42,000 bricks.

Other sculptures include a gardener at work, life-size ducks emerging from the garden’s cypress pond, an American bald eagle, a woodpecker, a mouse, and a nature-themed selfie station.

Vassar predicts the monarch butterfly will be the most memorable sculpture for guests of all ages.

“We have this incredible fascination with butterflies, they are beautiful and magical…we are mesmerized” every time we encounter one in the wild, she says.

“Any way we can get people to come and be awake to their connection to nature and the importance of appreciating our planet’s biodiversity,” she continues, is in line with the garden’s mission.

Legos have universal appeal across generations because of the “creative element,” says Vassar. “You can take these very basic building blocks and create something truly magical.”

The sculptures on display were first designed not on a computer, she says, but by the artist’s team, piece by piece and with imagination.

“They’re building the same way a lot of us still do with our kids,” she says.

The exhibition is close to the children’s playground with climbing logs, pumps for water games and sand.

Vassar says his own children enjoy exploring plants in the garden, including agave, cacti, giant grasses and button flowers.

Whenever children can see something new and different in nature, she says, it sparks curiosity.

Due to recent rainfall, the Garden’s World Collection is particularly lush at the moment, enveloped in banana trees that create a canopy over the walkways.

“It really feels like entering a jungle,” she says.

From here, families can stroll to the Culinary Garden, home to artichokes, corn, vines, and apple trees.

Many urban kids have never seen produce in the ground, Vassar says, and they wonder how the different varieties make it to the grocery store.

The lessons “help children understand where their food comes from and why plants are important.”

Vassar hopes to see new visitors who are drawn to the property due to the Lego exhibit to explore the area further.

“Sometimes people… don’t know how much they love plants and gardens until they see an exhibit like this and learn about the plant world,” Vassar says. “Maybe they lost that connection with nature or forgot about it.”

Allison Bagley is a Houston-based writer.

Things to do: Visit LEGO sculptures while learning about nature at the Houston Botanical Garden