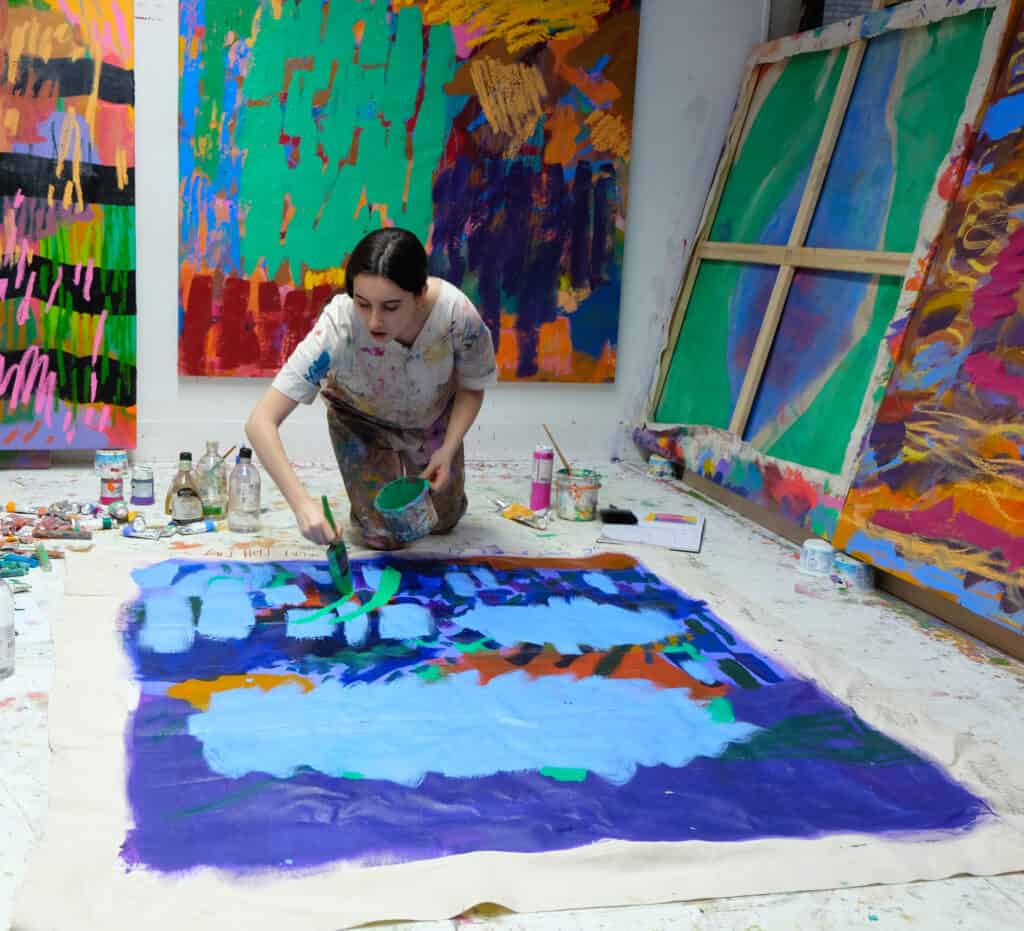 Emerging painter Rebecca Gilpin shares her tips with other emerging artists ahead of her duo show ROAM at Fitzrovia Gallery this week.

First of all, can you tell us a bit about the evolution of your practice that inspired this show? It looks like there has been a massive change in materials and visual style? How did it happen?

Yes, I had a big change in my job recently after my show last summer; ’96 Tears.’ I have two very distinct ways of working that I have alternated between over the years, oil painting and dip coloring.

There are several reasons for this change in my practice. First, dip-stain painting involved a great deal of chance – when left to dry, the works would change and evolve uncontrollably. I enjoyed that, but I also wanted to have more determination on the end result. It’s a challenge to own each brand, for the more recent works I maintain an instinctive process but overall it’s more confident and orderly.

Second, printmaker and painter Barbara Rae came to see my latest exhibition and suggested that I experiment with oil painting to achieve richer colors. He is someone I admire and I appreciated his criticism. With two fellow artists, I created my first collaborative experimental oil painting. It forced me to trust my judgment and be more assertive with my brushstrokes.

Also, the dip stain paints were very soothing, which seemed relevant during the pandemic. They served a purpose at a time when their energy was relevant and needed. Now I live a life full of energy and I want my paintings to radiate and reflect that. In some ways, they encourage and inspire people to engage in the dynamism of life.

Your next exhibition at the Fitzrovia Gallery is called WANDER and shows your work with Henry Ward’s. How did you meet Henry? In what ways do you think your work is conversational?

I’m a huge fan of Henry’s work – he has a particular aesthetic that really appeals to me. I first met him briefly at the Liliya Art Gallery, we exhibited in the same salon. Seeing his work in person, I noticed that we both play with the threshold between abstraction and representation, but in very different ways. I think that together the works will open interesting dialogues. The exhibition will be open from 20and – 24and April and the Private View is from 6 p.m. to 9 p.m. on the 21stst.

Stylistically, your current work is very abstract, authoritative, colorful and vibrant – what kinds of themes underlie the pictorial surface?

I lost a friend just before Christmas and became interested in spirituality and the afterlife again. Doors within doors is a recurring motif in my work that has been rekindled by this loss and subsequent research I have conducted on Buddhism and reincarnation. Different modes of spirituality, and my engagement with them, correspond to different series within my practice.

I constantly search for answers as to why we are here, questioning the dichotomy between spirituality and existentialism. In my work, texture and layering create depth and allude to passing time and my search for meaning.

I recently completed a painting named after Chopin’s study Cascade. I am drawn to the beauty of nature and how art can only attempt to portray it. I heard of a waterfall in Canada called Cameron Falls and fell in love with the idea that in spring the water glows a pink color. Waterfalls often symbolize power and spirituality as well as movement and change.

I know that you are very influenced by music and that you even thought of becoming a musician before a fateful incident of stage fright. How does music continue to influence your practice?

I always paint to music and I think I always will – I don’t like silence. When I started this series I was writing song lyrics on canvas, now I’m taking a more subtle approach to imbuing the work with sounds and melodies. The musical rhythm envelops me while I paint, I transfer it to the canvas through action painting with the brush strokes corresponding to the rhythm.

It’s funny because I can see that the album covers have subconsciously appeared in the color scheme of my latest painting The zigzag wanderer. Often my work is most influenced by the upbeat, upbeat songs I listen to in the morning to get me motivated for the day.

The title of the show, WANDER is taken from a B52 song – did you and Henry both react to this song and wider music in your creation of the works?

I paint a lot on B52s – I’m currently reading a book about them called cool town. When we were brainstorming ideas for the show, we came across WANDER – we both love the song and thought it suited the concept of the show as it alludes to wandering around the similarities and differences in our work.

I listen to everything when I paint – Bossa Nova, Rock, Jazz, Classical, Folk, Blues. Usually I listen to one genre for a whole day and then switch the next day – it’s interesting how the work changes depending on the music I listen to.

You work from the Hive Studios space of the Koppel project in Holborn – it’s a whole community. How is it to work from there? What other artists, with whom you share a studio, inspire your work?

It really is quite the community. A friend of mine, Fiona Roberts works upstairs and I am inspired by the way she thins her paint and the fluidity of her brush strokes. With Sam King, I share a lot of the concepts behind the work, even though we have completely different ways of doing it.

Luke Silver and I used to give each other reviews when he was at Koppel – I find his technique fascinating, he primes canvases 6-8 times before starting a painting. It made me think about the importance of preparing a surface. Since discovering Luke’s technique, I have come across other artists who prepare their surfaces in interesting ways so that the paint lays on the canvas exactly as they wish, for example, Andrew Graves.

I’m lucky enough to work alongside Doug D’Arcy who was MD of Chrysalis Records and before that was a roadie for Led Zeppelin, one of my favorite bands of all time. He always tells me stories about musicians from the 60s-70s, I started painting little pictures of those stories.

You are a real engine in terms of networking, management and public relations, keeping you up to date with the latest news from the London art scene. How do you do? What advice would you give to other young creatives about managing administration?

Thanks – I’m doing my best. First of all, I always have a notebook with me to plan my days and weeks as if I were a freelancer. It’s important to set goals and be organized so you don’t get overwhelmed.

In terms of administration, I set aside time each morning or one day a week to do everything. But to be honest, it’s pretty constant. I find myself working a lot on weekends but it’s the most rewarding job and I wouldn’t want to do anything else.

Sage advice I would say, make daily checklists and set weekly goals. Also, I’ve said it before and I’ll say it again, everyone should read the Delphian Gallery book Navigate the world of art. Everything you need to know and more is there.

What’s next for you after the April show at the Fitzrovia Gallery?

A little break of course – then back to the studio. I have a few other group shows that I’m really excited about. I look forward to the exhibition that Lucy Jagger and Angela Johnson are curating – I know Stacie McCormick is exhibiting work with many others that I admire.

Also, towards the end of the year, I created a commission for the Children’s Wrd of Chelsea and Westminster Hospital, which I had wanted to do for a long time. I researched the impact of art on mental health and spoke to an art therapist who gave me lots of information to read. I also hope to do a residency at some point – fingers crossed!

Rebecca Gilpin has a duo show WANDER to Fitzrovia Gallery from 20and at 24and April and a collective exhibition And now to PM/AM Gallery from April 19 to May 23, 2022. The openings of the two exhibitions will take place on April 21, from 6 p.m. to 9 p.m.