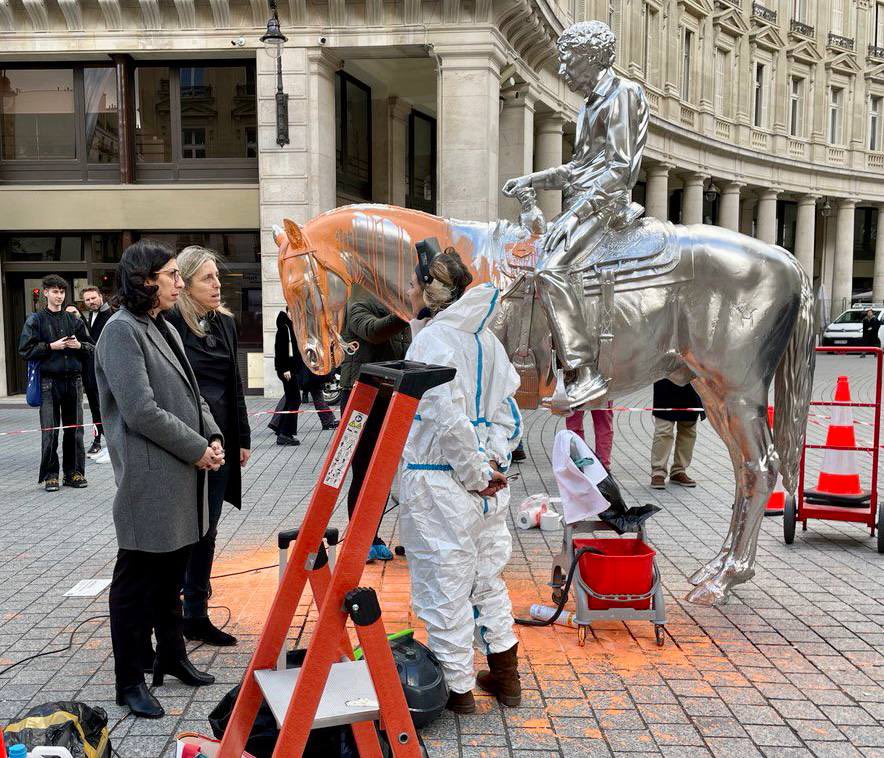 On Friday, climate activists in Europe targeted works of art in three locations, but the protests were a departure from past actions because these works were not protected by glass. All three protests were also held for the first time on the same day as part of a concerted effort.

In Paris, Milan and Oslo on Friday, climate activists from local organizations from the umbrella group A22 Network doused sculptures with orange paint or flour, as UN climate talks unfolded in Egypt. This time, the works were hit hard and were not covered with protection. Two cases concerned exterior sculptures. Nevertheless, none of the works of art are said to have been damaged, although some are still monitored for possible additional cleaning.

At the entrance to the Bourse de Commerce – Collection Pinault museum in Paris, two members of the French group Dernier Rénovation sprayed the stainless steel sculpture of Charles Ray Horse and Rider with orange paint. One of the protesters also climbed onto the life-size horse and put a white T-shirt on the rider’s chest. The shirt read, “We have 858 days left,” referring to a deadline to reduce carbon emissions.

Hard-debated attacks on artworks by climate activists continue at a rapid pace around the world, but so far most cases have involved artworks kept behind glass coverings, preventing any actual damage. But fears persist that similar acts could potentially cause irreversible damage. Earlier this month, a joint statement from international museum directors said they were “deeply shocked by…[the] risky endangerment” of works of art in their custody in light of this continuing trend.

On Friday, French Culture Minister Rima Abdul Malak visited the Bourse de Commerce after the incident, and tweeted: “Eco-vandalism goes up a notch: an unprotected sculpture by Charles Ray has been sprayed with paint in Paris.” Abdul Malak thanked the staff who “responded quickly”, adding: “Art and environmentalism are not mutually exclusive. On the contrary, these are common causes!

The stock exchange, whose CEO Emma Lavigne was present during Abdul Malak’s visit, declined to comment on the incident. Charles Ray’s studio also did not respond to request for comment.

On the same day, the 46-foot-tall Monolith (1944) by Gustave Vigeland in the Vigeland Sculpture Park in Oslo, as well as surrounding sculptures by the same artist, were also sprayed with orange paint by the local group Stopp oljeletinga (Stop Oil Search). The Oslo Monolith is a popular outdoor attraction and depicts 121 men, women and children intertwined and carved from a single piece of granite.

Cleaning the porous sculptures will be more complicated than other works that have been targeted, the museum said.

“We have done the necessary cleaning for now. However, we [continue to] monitor the situation to see if the paint has penetrated the granite. If so, we will of course look at other requirements,” Vigeland Museum Director Jarle Strømodden said in an email to ART news. “Neither The Monolith, nor the granite sculptures in question, suffered any physical damage. The sculptures are located in a public domain, a park open to everyone 24/7 365. It’s all about trust.

On the same day in Milan, the local Ultima Generazione (latest generation) poured sacks of flour over Andy Warhol’s 1979 painted BMW at the Fabbrica Del Vapore art center. The group also confirmed that “the action took place simultaneously in other countries of the world, with the other campaigns of the A22 Network”.

Reached by phone, an employee of Fabbrica Del Vapore said the Warhol-painted BMW had been cleaned and was back as part of their Andy Warhol exhibit until March 2023.

Reactions to the climate protesters’ dramatic methods are mixed. Israeli writer Etgar Keret recently compared the attacks to a form of “hate crime against art”, in a November 17 editorial in the French daily Release. Meanwhile, political journalist Thomas Legrand, claimed in the same French daily that climate activists are “actually quite calm”, if we compare them to the French “ultra-leftist” groups of the 1970s and 1980s.” I find them rather patient, polite and peaceful,” he wrote, given the urgency of the context. “How can we not understand?”