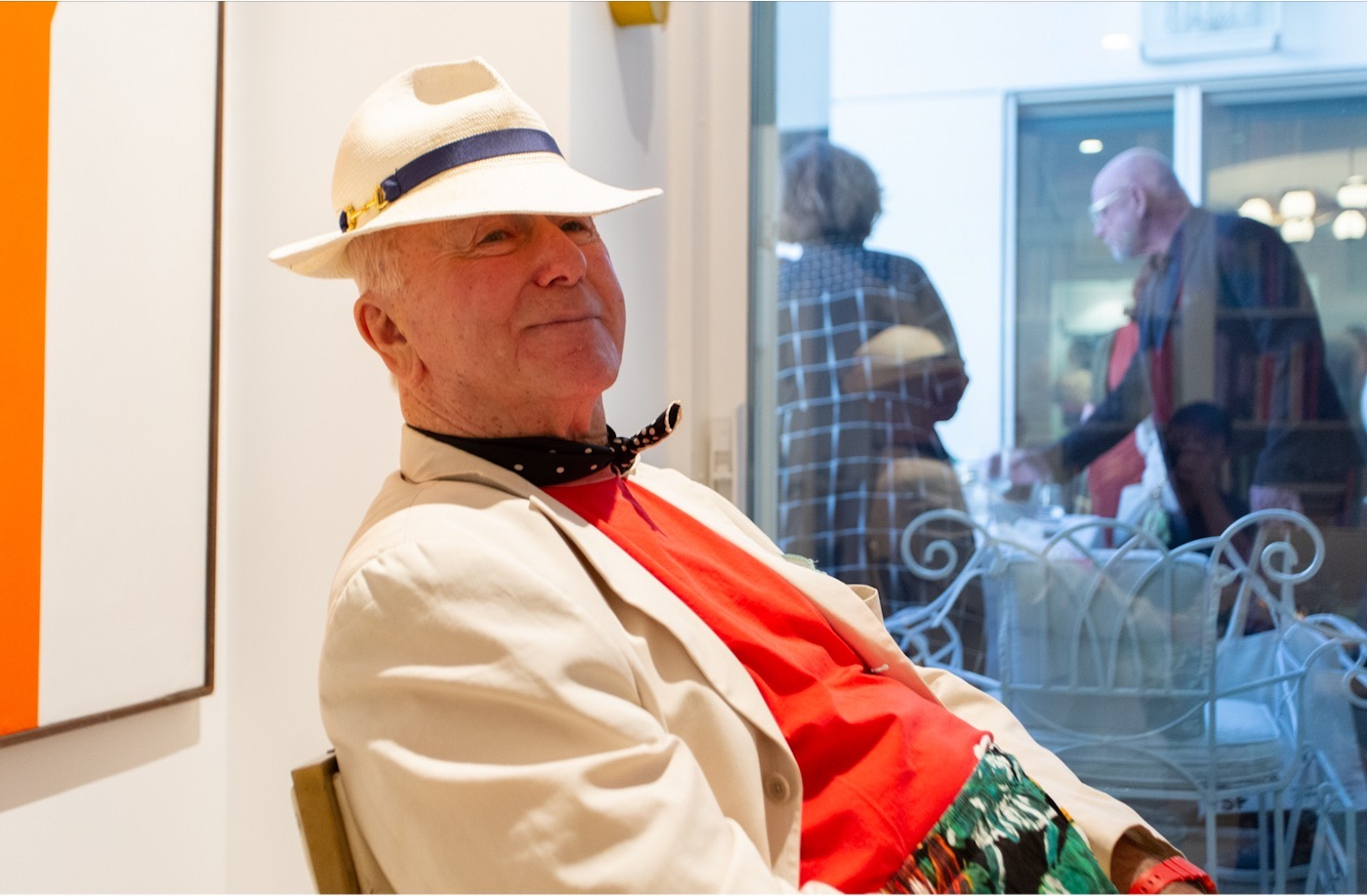 Billy Al Bengston, the influential painter who was a key figure in the heady and free-spirited Los Angeles art scene of the 1960s, died of natural causes on Saturday, October 8 at his home in Venice, Calif. “Words cannot describe the loss of this California legend, who was loved and revered by so many,” read a statement released by his gallery, Various Small Fires. The artist was 88 years old.

Bengston gained notoriety with his harsh enamel or lacquer painted abstractions that featured symbols like chevron “sergeant’s stripes” and hearts and depictions of automobile parts, as he was a motorcycle enthusiast. Critics have associated his work with the Finish Fetish movement or West Coast Pop Art, although he never fits quietly into either label. In the mid-1960s he disrupted the pristine flatness of his surfaces by attacking them with a hammer, calling the resulting works “dentos”.

“In the context of post-war art, decidedly flat abstract images were advocated. The same goes for requests for so-called “American style” painting that could distinguish a work from European modernism. Sergeant Stripes kills these two birds with a very well placed and very spiritual stone,” wrote reviewer Christopher Knight in the Los Angeles Time in 2017.

Bengston got his start with the legendary Ferus Gallery in Los Angeles, which also showed Ed Ruscha, Larry Bell, Ed Moses and Robert Irwin. Even among the cadre of hyper-masculine, larger-than-life personalities surrounding Ferus, Bengston stood out.

“He was the leader of this pack,” writer Hunter Drohojowska-Philp told Hyperallergic. “He was a terrific athlete, a surfer, who could stay up all night at the Whiskey-A-Go-Go dancing to Ike and Tina. Even at school, we called him the rainbow, for the number of colors in her outfits. Michael Slenske, a writer, editor and curator based in Los Angeles, described Bengston as “a mythmaker”.

Born in 1934 in Dodge City, Kansas, Bengston spent his formative years in Los Angeles, where his family moved when he was a child. He attended Manual Arts High School, whose alumni included Jackson Pollock and Philip Guston; then, at Los Angeles City College and California College of Arts & Crafts, Oakland, his teachers included Richard Diebenkorn and Saburo Hasegawa. He then studied with the famous ceramist Peter Voulkos. “I couldn’t believe the things Voulkus could do, and I still can’t believe it,” Bengston said in a 2016 interview with Jennifer Samet for Hyperallergic’s. Beer with a painter series. “I knew I would never be as good a ceramist as him. I decided to be a painter because I thought I could paint better than Pete.

Between 1958 and 1963 Bengston had five solo exhibitions at the Ferus Gallery, and in 1968 the Los Angeles County Museum of Art held a 10-year retrospective, designed by then-emerging architect Frank Gehry. But despite his critical and financial success, Bengston had a contrarian streak, exemplified by his decision to make the direct center of his paintings the focal point, a cardinal sin according to his art school teachers.

“It was this radical gesture of pushing back what was accepted,” Esther Kim Varet, founder of Various Small Fires, told Hyperallergic. “Many artists consider it an original source for the construction of an alternative narrative.”

As a key member of the “Cool School” centered around the Ferus Gallery, Bengston helped legitimize West Coast art in the eyes of the New York-based Eurocentric artistic elite. With his abstraction and exploration of industrial materials, he pioneered the Finish Fetish movement, though his work was to expand beyond its boundaries. His personality as a hardened Californian, motorcyclist and surfer undoubtedly contributed to his notoriety.

Bengston himself described his adversarial approach to Hyperallergic in 2016. “If people say you can’t do something, that’s what I’m going to do. And I’ve screwed up about the center all my life… Is there any other place besides the center to put the form? I don’t dive around the edges of the pool, if I can help it. You opt for the sweet center.

The works of the painter Thang Tran Phenh sold for 1.5 million euros at French auctions