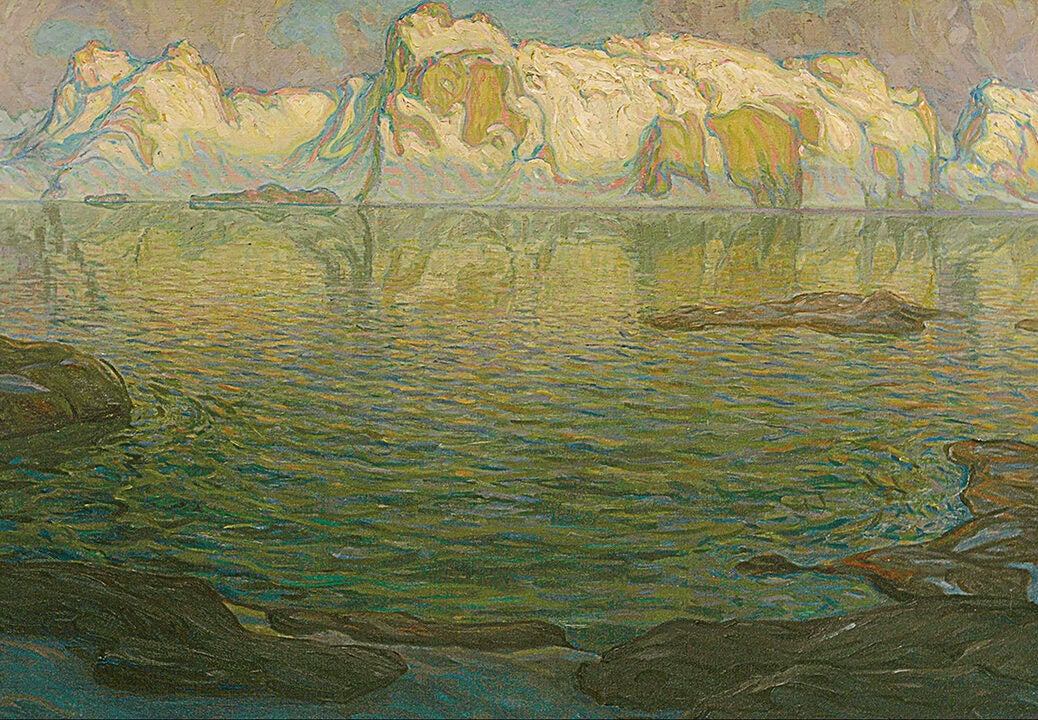 Anna Boberg: a Swedish painter fascinated by the Norwegian landscapes of Lofoten

The hardship and endurance involved in Anna Boberg’s art was poetically summed up by anthropologist and translator Hanna Astrup Larsen in 1913. Writing in the American periodical The craftsman, Larsen described how: “For several months of each year, this delicately nurtured woman from gay Stockholm braves the hardships that men endure in order to put a new point on the map or plant their country’s flag where the flag does not. ‘has never been restless before.” These were the days of the polar expeditions of Roald Amundsen and Captain Scott, but the flag planted by Boberg was that of women painters and their courage in the pursuit of art.

In the meantime, thanks to an article from the Boston Daily Globe Entitled – for effect rather than precision – “Barefoot in Polar Snow: A Swedish Artist Braves the Cold for Arctic Effects”, Boberg (1864-1935) was already hailed as “Sweden’s greatest artist”. Although her reputation then slipped behind contemporaries such as Anders Zorn, Carl Larsson and Hilma af Klint, she was undoubtedly the hardiest of the lot. For more than 30 years, Boberg was more at home in the Lofoten archipelago, a group of isolated islands off the coast of Norway and more than 100 miles north of the Arctic Circle, than in Stockholm or in any any European capital.

Boberg’s early career did not mark her for a life among the fishing communities that inhabited the fringes of these snowy, mountainous islands. She was the daughter of a distinguished architect, Fredrik Wilhelm Scholander, and married another, Ferdinand Boberg, and she seemed set for a more distinguished career. Little is known about Boberg’s early life. She was, however, largely self-taught, aside from the benefit of a few weeks of lessons at the Académie Julian in Paris, a venue that attracted female artists from across Europe. She also met her husband in Paris.

Initially, Boberg worked in the applied arts. She created Art Nouveau pieces for the Swedish porcelain factory Rörstrand, as well as glass and textiles; she designed opera sets and painted wall hangings that looked like tapestries; and she was a decorative painter for private homes and hotels. In the late 1880s, she also exhibited watercolors.

What changed the course of her career, however, was a trip to Lofoten with her husband in 1901 (until 1905 Norway was ruled by Sweden). At the end of the visit, she refused to leave and sent Ferdinand away without her: “I was so fascinated by the nature of Lofoten”, she wrote in her 1934 autobiography, Envar sitt ödes lekboll (which roughly translates to “Everyone is a plaything of fate”), “that I just refused to go home. I wanted to stay and paint, paint, paint. The difficulties of being a single woman in the Arctic did not discourage her: “I was my own master and my own helper.

What first impressed him as he approached the islands was the Lofoten Wall, a range of mountains which, seen from afar from a boat, formed an impenetrable barrier to the horizon. After her first summer visit, she returned more frequently and especially in winter when, as she wrote dreamily, “the full moon, like an icy sun, disperses the noonday night, when the aurora borealis blaze among the stars and storm clouds. and the waves continue, when the Lofoten wall forms a marvelous fortress with bastions and alabaster towers…” Then, she says, visions appear and “the sea becomes strewn with armadas of Viking ships”.

As Larsen wrote, “At first she was lucky with the fishermen. She slept wherever there was a bed and didn’t inquire too much in disgust. Then her husband designed a small wooden studio-house for her on the cliffs above the fishing port of Svolvær. It was built in just 74 hours and became their vacation home, workspace and the base from which they ventured into the islands’ hinterland. She bought a small boat, the Fru Boberg, so she could both fish and paint the views from the sea, and also designed a portable easel – a series of wooden struts that strapped to her waist and were supported by her shins – which allowed her to paint anywhere. In the coldest weather, she tied her brushes to her fingers and wore high-waisted fur pants and a fur coat, hat and boots. “Fishermen laugh at his uniform,” Larsen said, “and never get tired of their joke, ‘Are you male or female?'”

[See also: The Brazilian landscapes of Frans Post capture the dismal dawn of the colonial age]

Boberg was not the first artist to head this far north – Johan Christian Dahl and Peder Balke had traveled there in the first half of the 19th century – nor was Boberg the only female painter in the ‘Arctic. Others include Emilie Demant Hatt from Denmark and a fellow Swede, Anna Nordlander. There were also pioneer mountaineers and travel writers who were beginning to explore the region. None, however, were as integrated into the landscape and scattered communities as Boberg.

Indeed, Boberg’s extensive examinations of Lofoten’s coastlines, mountains, and glaciers were, in his own mind, almost as scientific as they were artistic. She imagined herself “providing an illusory glimpse of a respectable polar researcher!” – and she was partly right. Her paintings of glaciers and the photographs taken by her and her husband are now used to compare the health of the region’s glaciers then and now.

This painting, Silent Evening – Lofoten Stage, circa 1910-14, now in the Malmö Museum of Art, is typical of his Arctic views. Boberg worked in a variety of styles and finishes and the paint here ranges from thick in the distant mountains to thin in the glistening water. Its manners divide the critics: it is slow to impose itself in Sweden but its work is better appreciated when it is shown in America. There, reviewers noted how “the colors seemed to have been squeezed out of the tubes” and that she was a “strong, but somewhat crude colorist”. His painting, however, was also a physical response to landscape. She could portray the diaphanous whenever she wanted, but also mimic the tactile properties of snow, rock, and water. Like a outdoors painter she needed to work quickly and a flawless finish was neither possible nor emotionally desirable.

What she wanted to convey was the mood of the bay and its delicate lighting effects – the low sun casting the scene in a yellow-green hue that manages to be ethereal rather than sickly. In many Lofoten paintings she showed boats and fishing huts, in others the drama of the Northern Lights, and in one eerie picture the vision she claimed to have had when a ghost ship, “the Flying Dutchman of the polar seas slid past me in all its terrifying splendor and disappeared into the mist”. But here, she strives to depict a gentle nature emptied of both men and spirits. The result is a timeless scene that could just as easily be imagined as real. As one reviewer noted, Boberg had a particular gift for capturing “the opalescent effects of long sunbeams shimmering across glacial expanses”. What Boberg came up with independently was a Nordic version of Monet’s images of the Normandy cliff coast at Étretat from 1883.

Boberg’s success in Paris and America helped win over her fellow Swedes and she became both a friend and art tutor to Crown Princess Margareta, while in 1926 she and Ferdinand accompanied Crown Prince Gustaf Adolf and Lady Louise Mountbatten on a State visit to India. The couple also traveled extensively in Europe, as well as Palestine and Egypt, and they also devised a project to record Sweden’s most notable sights. Over the course of several years, they rented a bus to tour the country, sketch and take notes.

Although she painted wherever she went, it was Lofoten that Boberg returned to until shortly before her death in 1935. She once described the ice breaking in the mountains as if “the glacier had just pulled a salvo”. No other place she had visited could match that.

[See also: How the Ukrainian painter Arkhip Kuindzhi laid out the spirituality in nature before Russian eyes]

This article originally appeared in the July 13, 2022 issue of The New Statesman, The selfish giant

A Different Rockwell: Painter and Translator Daisy Rockwell Charts Her Own Path | arts and culture