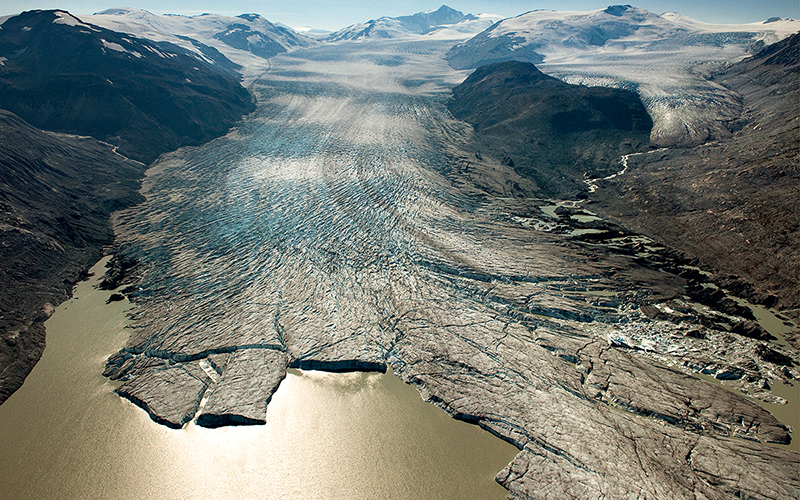 On a hot 2014 afternoon, huge orange flames sucked oxygen from the air surrounding the ancient gold mining town of Happy Camp, California. They stretched and danced across the dry valley, ravaging the Klamath National Forest in a fit of black smoke. Photographer James Balog watched from the colder end of the increasing temperature gradient, a few miles outside the city, with his camera in hand.

A pyrocumulus cloud, “certainly over 10,000 feet high,” Balog says, suddenly erupted like a volcanic eruption over an expanse of trees. The smoke, benzene, formaldehyde and intense heat developed in the form of a mushroom. On the ground, he raised the camera to his eyes and photographed it.

During a 40-year career as a photographer and writer, Balog has delved into the ravines, moraines, waves and uplifts that texturize terrains, disasters and ecosystems. He knows that, when offered to him millennia, there is no artist more powerful than the forces of the Earth. Through the lens of his camera, he can also contemplate the greatest museums in the world. “It hits you in the guts,” he said. “Even though it’s horrible, it’s beautiful.”

Before starting this career, Balog, now 69, was a tree climber, campfire lighter and woodland dabbler. During his teenage years he learned to love nature on hiking and rock climbing expeditions, avidly climbing heights in Maine and New Hampshire. He remembers reaching the summit of Mount Washington, the highest peak in the Northeastern United States, in his early twenties, and “the glory of being on high and gazing upon the vast lands below. of me”. Although he had “no knowledge of shutter speed and aperture,” Balog says, he was required to carry a camera, “so that I can keep a memory of these amazing places.”

Balog honed both disciplines – rock climbing and photography – while pursuing a master’s degree in geomorphology at the University of Colorado. Finally, he came to a fork in the road. “By the time I finished my graduate studies, I realized that I didn’t want to express my interest in nature through scientific papers,” he says. “But boy, I was having fun with my camera.”

Balog made the leap to professional photography in 1981. In his first series, “Wildlife Requiem», Published in 1984, he photographed hunters with their elk, deer and bear trophies. The message, he wrote, was to illuminate the “tension between the simultaneous existence of life and death, freedom and compulsion, destruction and birth.”

In a later project titled “Survivors“, Balog photographed endangered animals in traditional studio photography frames. He hung a white sheet in the background for framing – sometimes indoors, other times stretched out in a open field – and projected studio lighting to make 62 portraits of human-like animals: giant baboons and pandas sitting upright, a Florida panther jumping between two stools, a gazelle in a grassy field. Balog sought to capture how animals became isolated from the truly wilderness as a result of human activity. The series was published in 1990. Since then, many species he has photographed have come closer to extinction.

Balog’s 1993 “Anima, In which he seeks to challenge “humanity’s high perch in the world,” shows human subjects and chimpanzees posing together in a studio, sharing the setting with 98.4% of their genetic code.

Balog admits that in his early days as a photographer he viewed humanity and nature as separate but colliding, an observation that informed the symbolism and creativity of these early photoshoots. But he has since refined his thoughts on the Anthropocene, realizing “the real truth, which is that people are part of nature,” he says.

Balog has spent most of his career photographing the changing and fragile world amid the climate crisis: traveling through ancient forests, erupting volcanoes, wildfires and the aftermath of hurricanes and floods. He coined the term “human tectonics” to describe the invariable impact humans have on the rest of the environment, and vice versa. Much of his photography seeks to show time as fleeting and the connectedness of humanity and nature.

“Science is role models, and art is the story we tell ourselves about role models,” says Balog. “I think very strongly that humanity needed to tell a different story about what is happening in the world of the Anthropocene.”

Difficult subjects inspired innovation. For her early 2000s Tree series, in which he photographed some of the tallest trees in the world, Balog climbed to their top and rappelled down, photographing along the way. He then superimposed the images to piece together the whole subject: the trees were just too big to be photographed all at once, without sacrificing detail. He has since adapted the technique to capture other large subjects, such as glaciers and mountains, blown flames during forest fires, and debris piles after natural disasters.

Some of Balog’s most acclaimed works deal with ice. In 2007, he launched the Extreme Ice Survey, the largest photographic survey of glaciers and ice caps on Earth. At its peak, 43 cameras were positioned around the world, taking time-lapse photographs of glacial retreat and melt. In 2012, Chase the ice, a documentary film about Balog’s company, has been released. He received the 2014 News and Documentary Emmy Award for his exceptional programming on nature.

Balog recognizes that images have limits, although this is anathema among photographers. And so, often in tents at the end of long days of expedition, or in his cabin in Colorado (“my mountain version of Walden Pond”), he writes — 30,000 words in his latest book, The human element: an anthropocene time capsule, associated with the 350 photographs he took during his four decades of career. The footage – of scorching lava flows, polar bears, elephants crossing the tsunami rubble – doubles as a retrospective series and a dramatic tale of the unfolding climate crisis.

“Memory is our response to the fact that time exists,” Balog writes in one of the book’s essays. “Photography is a reaction to the need for memory.

“It’s not enough to make beautiful celebratory images of nature, given the world that goes on all around us,” he says. “My job is to continue to deepen and broaden the story that humanity tells itself.”