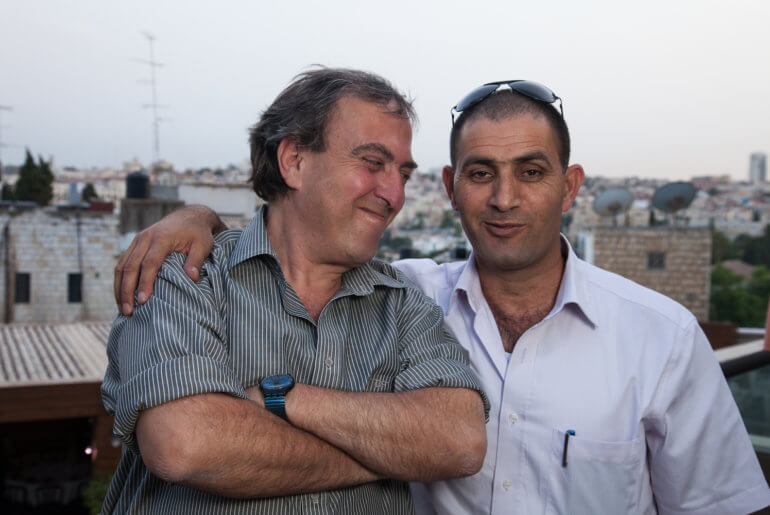 In the context of the recent escalation of violence in the Middle East and Ireland’s condemnation of Israel’s de facto annexation policy, Apeirogon by Colum McCann is more than ever worth reading.

Unlike a pentagon, an apeirogon has an infinite number of sides or aspects. The title of McCann’s 2020 novel gives the reader an indication of the myriad facets that make up this novel. And yet at its heart is the undisputed fact that the State of Israel is guilty of continuing human rights abuses against the Palestinian people.

McCann tells the true story of Palestinian Bassam Aramin and Israeli Rami Elhanan, and their daughters: Abir Aramin, 10, killed by a rubber bullet in 2007; and Smadar Elhanan, 13, killed by suicide bombers in 1997. Bassam Aramin and Rami Elhanan met through the organization Combattants for Peace, which states: “Our ultimate goal is to end the occupation and the establishment of a Palestinian state based on boundaries; two states living side by side in peace and cooperation or any other just solution agreed upon in negotiations.

The structure of the novel is unusual, in some ways resembling the workings of the restless mind. It seems to “jump” from one thought to another, the new idea sparked by one aspect of the previous one. Some of these tangents can be tenuous and fleeting, while others are key aspects of the intricate woven fabric that is this novel.

This narrative style allows McCann to create a web of connections that spans the globe geographically and historically. Everything is kind of linked. Human rights violations form a pattern that includes the Middle East. Rubber bullets were first used by the British state in Northern Ireland, killing children there. [“Rubber bullets” is something of a euphemism, as only the coating of the bullet is rubber.] And the use of deadly explosives is being explored in many tangents, including the US dropping of atomic bombs on Hiroshima and Nagasaki.

The mind, when it has to absorb an enormity, cannot constantly dwell on it. To apprehend a tragedy, the mind keeps coming back to the fact, with pauses, bypasses it, grabs it slowly over time. In this way, the narrative never loses sight of the murders of Abir Aramin and Smadar Elhanan. Each time we come back to it, new aspects are added, their stories and those of their families becoming more and more clear.

The novel is structured like the Arabian Nights, counting 500 ascending and 500 descending sections, with a section titled 1001 in the middle. Many of these fragmented sections are devoted to migratory birds, which seem to be part of the web that holds global yet local history together.

The staff are part of a larger political context. Neither aspect of the novel loses sight of the other. To give a small example, McCann looks to his homeland, Ireland, and the warring north of the island in particular, to draw parallels. Here, the descendants of the Elizabethan settlers, the Unionists, fly Israeli flags, while the community who could be forgiven for feeling occupied by a colonizer, identifies with the Palestinians:

413
In the 1980s, the biggest sale of Israeli flags – outside of Israel itself – was in Northern Ireland, where loyalists flew them in defiance of Irish Republicans who adopted the Palestinian flag: entire housing estates shrouded blue and white or red black. white and green.

McCann has been accused of mystifying “the colonization of Palestine as a ‘complicated conflict’ between two equal parties.” However, McCann never appeases the Israeli state, one could even easily suggest otherwise. Here is an example:

184
Mordechai Vanunu, a nuclear technician whose job it was to produce lithium-6 at the Dimona nuclear power plant in the Negev, was sentenced to eighteen years in prison for leaking details of Israel’s weapons program . Vanunu smuggled a 35mm camera into Machon 2 and took fifty-nine photographs despite signing a confidentiality agreement years earlier. He first disclosed the details to a religious group in Australia where he fled. Later, in London, where he went to publish the information, he was seduced into a honey trap operation by a Mossad agent. He again met the female agent in Rome where he was overpowered, drugged, kidnapped, tied to a stretcher, driven by motorboat to a spy ship, bundled up in a cabin. He was interrogated by Mossad agents, brought back to Israel in a secret prison run by the Shin Bet. Almost twelve of his years in prison were spent in solitary confinement.

183
Cheryl Hanin Bentov, the honeypot that lured Vanunu to her capture, became a real estate agent in Alaqua, Florida, specializing in gated communities and waterfront properties.

The US side in the Middle East conflict is evident in several episodes, for example, when Bassam Aramin insists that an investigation be carried out into the death of his daughter (having had to pay for an autopsy himself), the judge, who defied all efforts to prevent this, goes to the site of the attack and finds

The court is of the opinion. We made the decision. We weighed the varied testimonies. Abir Aramin was a resident of the Jerusalem Municipality. We have decided. The responsibility of the State of Israel. He was determined.

While There had been no criminal charges, no official admission of guilt, it is nevertheless considered A landmark judgement.

Several newspaper articles have been published in Israel and the United States lamenting the judge’s decision following the Aramin case. No civil proceedings should ever be allowed in such a military situation, they said. Criminal courts had already indicated that there was a lack of sufficient evidence. Why should the state shoulder the burden? It had been pointed out in court that it was possible that the child had been hit by a stone thrown by rioters and, although she had been hit by a stray rubber bullet, an unlikely scenario, the commander testified that ‘they were under attack. The court ruling could, in the future, endanger the lives of Israeli soldiers who are forced to make critical split-second decisions in the interests of security. If they hesitated, they could endanger not only themselves, but also their fellow soldiers and even citizens. Furthermore, and most alarmingly, Bassam Aramin was a convicted terrorist. He had spent seven years in prison for a series of hand grenade attacks. He belonged to the Fatah faction, which he continued to support. A million shekels would, without a doubt, be a long way to another terrorist enterprise and who could know what he was planning now.

And when Bassam Aramin visits US Senator John Kerry in his office, there is a recognition of

McCann does not paint a picture in black and white. Smadar Elhanan’s parents do not side with their state. Her father, Rami, developed this position over time, while her mother Nurit openly supports Palestinians and frequently receives abuse and death threats.

Abir Aramin’s father, Bassam, was jailed at the age of 17 for seven years for throwing stones. It comes from a tradition of struggle against the occupation. McCann leaves no doubt as to his sympathies.

Towards the end, McCann writes in top-down 94, returning to his title giving a word once again,

McCann takes risks. One of them sells the rights to the film to Steven Spielberg, who said: “… since my childhood I have been a strong supporter of Israel…. And because I am proud to be Jewish, I am worried about the rise of anti-Semitism and anti-Zionism in the world…. If it became necessary, I would be prepared to die for the United States and for Israel.

One wonders how many sides will be left of McCann’s Apeirogon: five or six?

Apeirogon is a finalist for the Dublin Literary Award, shortlisted for the Booker Prize, winner of the National Jewish Book Award and named one of the best books of the year by The independent, the New York Public Library, and Library Journal.

A 5 minute reading excerpt from the novel with the author’s voice can be heard here.